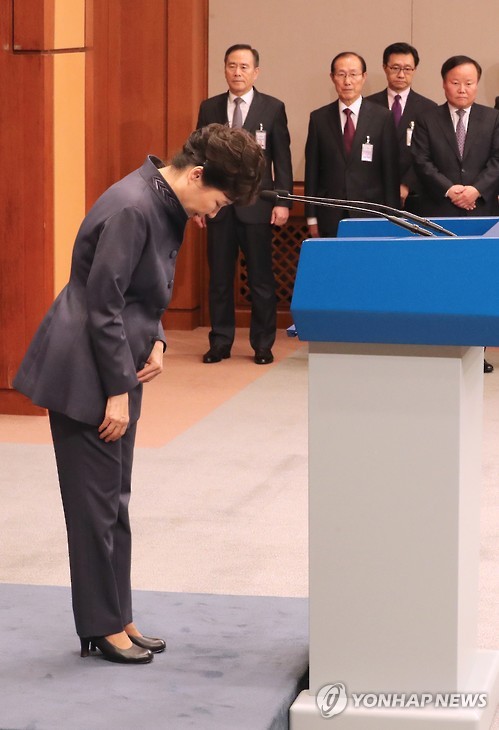 South Korean President Park Geun-hye bows after making a public apology over the leak of confidential documents, including presidential speech drafts, to her confidant Choi Sun-sil to get advice from her at the presidential office Cheong Wa Dae in Seoul on Oct. 25, 2016. (image: Yonhap)

The announcement by the Supreme Prosecutors’ Office came a day after investigators raided the houses and offices of Choi, who is suspected to be the behind-the-scenes power broker of the current administration.

On Tuesday, Park offered a rare public apology over a leak of dozens of presidential speeches to Choi before they were made public. Acknowledging her ties to Choi, which go back decades, the president said she asked for consultation “out of the best intentions” so as to be more thorough in her work.

Still, the allegations have only been snow-balling as local broadcaster JTBC, who first reported on the document leak, said earlier this week that there were other documents handed over to Choi, indicating a possible broader intervention by her in state affairs.

There have been a series of media reports on suspicions she peddled influence on a broad range of affairs.

The latest raids also included two nonprofit foundations Mir and K-Sports, which are suspected of raising a combined 80 billion won (US$70 million) from conglomerates with the help of the country’s big business lobby group.

Prosecutors are looking into whether some of the money was funneled to Choi.

Choi, however, has been denying all allegations raised against her, except that she received and edited the president’s speech drafts.

In a recent interview with South Korea’s daily Segye Times she said it was only to “help better convey Park’s feelings” on certain issues. She is currently known to be in Germany.

The prosecutor-general ordered a “thorough investigation to get to the bottom of the case,” according to the top prosecution’s office.

The task force, comprised of 15 prosecutors under Lee, will look into the case independently and report only the results to the top prosecutor.