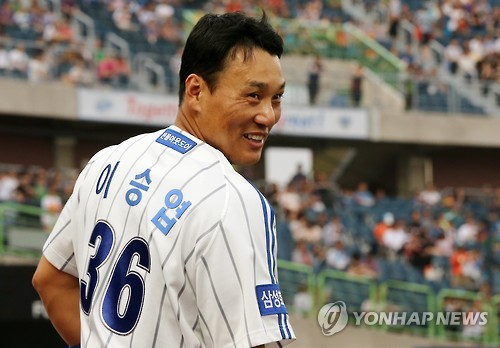 SEOUL, June 2 (Korea Bizwire) – Baseball fans usually prefer seats by the infield as they offer closer views of the action, and the bleachers are often the last seats to be filled. However, the 1,500 bleacher seats at the Pohang Ballpark, an alternate home for the Samsung Lions, sold out before the infield seats for its June 2 game.

This extraordinary phenomenon was caused by Lions’ slugger Lee Seung-yuop, who is stuck on 399 career home runs, a Korea Baseball Organization (KBO) record. Lee’s Lions will take on the Lotte Giants at the ballpark, with spectators hoping catch his historic 400th home run ball.

In addition to its historic value, the baseball industry is also witnessing the economic value of the home run ball. In the 2003 season, Lee hit a record 56 home runs, the highest number ever in an Asian league. A baseball fan returned the historic 56th home run ball to Samsung, and the team rewarded him with a golden ball valued at about 50 million won at that time. The 400th home run ball is expected to be worth even more.

To verify the authenticity of Lee’s 400th home run ball, the KBO will make special marks on the ball to be used for Lee when he comes to the batter box. The marks will only be recognized by KBO officials and the Samsung Lions.

However, butterfly nets used by spectators in 2003 to catch Lee’s home run balls will not be seen this time, as the KBO bans carrying items longer than one meter into its ballparks.

An ballpark official said, “Many asked me if they could purchase bleacher seats, but they were already sold out. Lee caused such an extraordinary phenomenon by selling the outfield seats first.”

The Samsung Lions will offer a baseball bat autographed by Lee, a new Samsung smartphone and two round-trip tickets to the Lions’ spring training site next spring to the fan who catches the ball. In addition, the fan will be invited to throw out the ceremonial first pitch at a Lions’ home game.