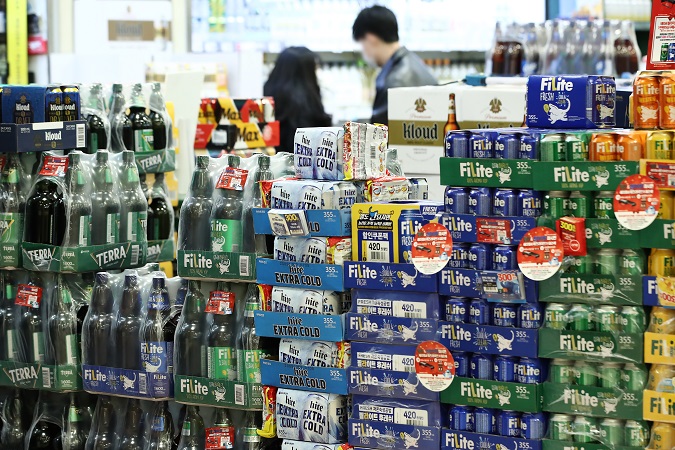 A variety of beers at a retail outlet in Seoul. (Yonhap)

Local households spent 4.3 trillion won (US$3.96 billion) on alcohol and cigarettes in the July-September period, up 6.2 percent from a year earlier, according to the data from the Bank of Korea.

It represents the largest quarterly figure since 1970, when the central bank began tracking related data.

The on-year increase is the highest since the 6.5 percent surge recorded in the second quarter of 2016.

South Koreans’ increased spending on alcohol and tobacco was attributed to collective fatigue due to the coronavirus outbreak and tougher social distancing measures.

According to data from Statistics Korea, South Korean households spent an average of 42,980 won on liquors and cigarettes during the July-September period, up 10.7 percent from a year earlier and a record high.

In contrast, South Koreans’ spending on leisure activities hit an eight-year low in the third quarter due to the coronavirus impact.

Household spending on entertainment, sports and cultural activities came to 12.4 trillion won in the three-month period, the lowest since the third quarter of 2012 and down 24.1 percent from a year earlier, according to the central bank data.