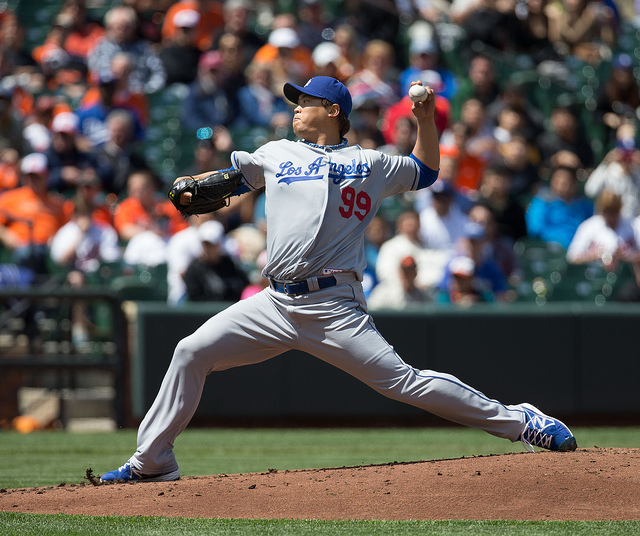 All Dodger games will be available on TV in Korean for the first time ever starting with the Dodgers’ Home Opener. (image: Keith Allison/flickr)

LOS ANGELES, April 2, 2014 (Korea Bizwire)  – SportsNet LA is the exclusive new 24/7 TV network of the Los Angeles Dodgers that takes fans behind-the-scenes of the team and offers in-depth access into the organization, providing an immersive experience with never-before-seen content and thousands of hours of comprehensive Dodger programming. The network announced today that it will launch Korean-language Secondary Audio Programming (SAP) for all live Dodger games on its air this season, a first for any Major League Baseball (MLB) team. The Dodgers have partnered with Radio Korea, the team’s Korean radio broadcast partner, to provide the service, which will start with the Dodgers’ home opener on Friday, April 4. Radio Korea broadcasters Richard Choi and Chong Ho Yim will call the games.

“We’re so thrilled that fans can now watch our games on TV in Korean all season long,” said Stan Kasten, President and CEO, Los Angeles Dodgers. “The Dodgers have an incredibly diverse fan base, and over the past two seasons we’ve seen more and more of Los Angeles’ Korean fans come out to support Hyun-Jin Ryu. Making games available in English, Korean and Spanish on SportsNet LA lets us reach even more Dodger fans than ever before.”

“We are excited to be working with SportsNet LA to deliver Korean SAP for live Dodger games,” said Richard Choi, Vice Chairman of RK Media. “Korean Americans are huge fans of the Dodgers and every game Hyun-Jin Ryu pitches is a major event in our community. This is going to be a great year to be a Dodger fan.”

The Dodgers have a long history with the development of Korean baseball dating to 1981, when Tommy Lasorda hosted clinics and lectures in Korea with Japanese pitcher Senichi Hoshino. The relationship continued in 1990, when the club hosted team presidents from the Korean Baseball Professional League for a baseball workshop and seminar and the club became the first Major League team to have a game broadcast in the Korean language on Sept. 9 of that year. On several occasions the Dodgers have hosted Korean baseball teams during Spring Training at Dodgertown in Vero Beach, FL, doing so with the Hanyang University team in 1995 and in 2000 with the LG Twins of the KBO following the clubs’ working agreement, signed in 1999. Most recently, Korean fans flocked to a sold out Dodger Stadium and created an electric atmosphere in support of their team during the finals of the 2009 World Baseball Classic.

The Dodgers currently have seven partners that are Korean owned and annually celebrate Korea Day at Dodger Stadium.

Time Warner Cable, Bright House Networks and Champion Broadband all carry SportsNet LA and we are in negotiations with all other providers. For more information about SportsNet LA or to demand the network, visit www.ineedmydodgers.com or www.quieromisdodgers.com or call 1-844-I-NEED-MY (1-844-463-3369). Follow the network on Twitter at @SportsNetLA, Facebook at www.Facebook.com/SportsNetLA and Instagram at @SportsNetLA.

Time Warner Cable SportsNet LA launched on February 25, 2014 as a 24/7 regional sports network that takes fans behind-the-scenes – deep into the Dodger organization – providing an immersive experience with thousands of hours of exclusive Dodger programming, including access to more than 160 live game telecasts each season. SportsNet LA is owned by the Los Angeles Dodgers through American Media Productions, LLC. The network is available to all cable, satellite and telco multichannel providers throughout Southern California, Las Vegas, NV and Hawaii.

RK Media is the leading Korean multi-media company in the US. It faithfully serves as a bridge that connects the Korean American community to main-stream America. RK Media has helped the immigrants build a sense of community awareness and assistance, in such disasters as the LA Riots in 1992 and the Northridge Earthquake in 1994. Throughout these hardships, RK Media has served as the lighthouse to those in need by guiding and strengthening the community through our broadcast. 2014 is the 25th Anniversary for RK Media and throughout its years it has become a comprehensive multi-media group. Not only has it become a leading source of information on the radio, but also through the internet and television.