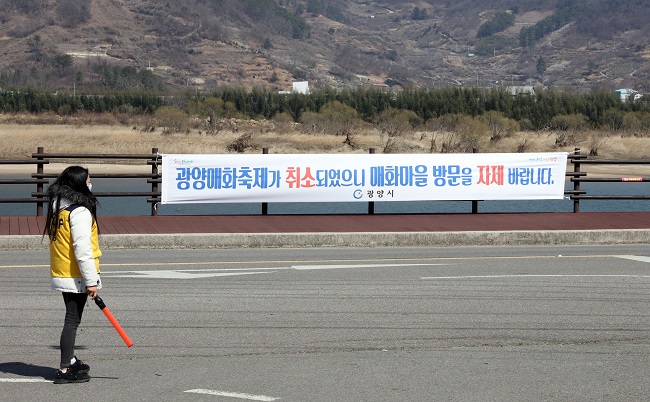 This file photo taken on March 6, 2020, shows a Gwangyang city official standing at the entrance of a public parking lot near the venue of the Gwangyang International Maehwa Festival in southwestern South Korea to turn away visitors after the festival was canceled due to COVID-19. (Yonhap)

SEOUL, Feb. 24 (Korea Bizwire) — Spring is just around the corner, but almost all spring blossom and cultural festivals across the country are likely to be called off for the second consecutive year amid little signs of a letup in coronavirus outbreaks, officials said Wednesday.

Many local governments have already decided to cancel their annual spring flower festivals again this year due to fears of COVID-19 transmission, though some others are considering holding festivals on a sharply reduced scale or in a non-face-to-face manner due to their reluctance to give up huge tourism revenues.

The Gwangyang International Maehwa (apricot flower) Festival, which takes place in the southwestern city every March to signal the onset of spring, will be canceled for the second year in a row.

The municipality of Gwangyang is asking people to refrain from visiting the Maehwa Village as part of its social distancing campaign.

To that end, it will completely close the village’s public parking lot and encourage springtime picnickers to stay away from the village via its website, social media and banners.

In addition, municipal authorities will strengthen crackdowns on people not wearing masks, as well as on street vendors and others engaged in illegal commercial acts, in and around the Maehwa Village.

Infection concerns also led to the cancellation of the Gurye Sansuyu Festival, normally hosted by the South Jeolla Province county of Gurye every March, for the second consecutive year.

The city government of Changwon, southeastern South Korea, still remains undecided about whether to cancel the Jinhae Gunhangje Festival, the nation’s biggest cherry blossom festival visited by up to 4 million tourists every March.

Last year’s festival was canceled due to the coronavirus pandemic for the first time in its 58-year history.

Changwon officials said they were studying ways to hold this year’s festival strictly in accordance with social distancing rules while leaving open the possibility of its outright cancellation depending on the number of confirmed COVID-19 cases.

“Discussions are still under way on whether to hold on to the Gunhangje festival, while we are closely following the pandemic trend,” an official said.

“Even if the festival is held, every measure will be taken to minimize the number of visitors,” he said. 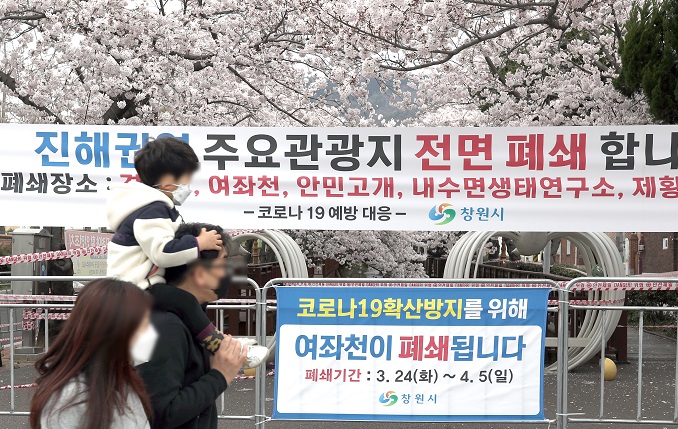 Citizens pass by a banner announcing the cancellation of the Jinhae Gunhangje Festival in Changwon, southeastern South Korea, in this file photo taken on March 29, 2020. (Yonhap)

“Cancellations of cherry blossom festivals have been inevitable as the spread of COVID-19 is unlikely to abate until the arrival of spring,” said an official at Gangseo Ward.

“We hope that the coronavirus situation will stabilize by the fall so that many people can enjoy the riverside festival instead,” the official said.

The Jeju Fire Festival, a representative cultural event hosted by the southern resort island annually, will be held in a non-face-to-face method this year, though it was entirely canceled last year, according to Jeju officials.

The event, also known as the field-burning festival, is intended for people’s good health and a good harvest by burning off old and wilted grass to kill vermin on the fields.

While all hands-on events, such as early morning group hiking, busking performances and a song contest, will be canceled, Jeju city plans to allow people to watch the festival’s symbolic fire-setting event slated for March 13 in a drive-thru manner.

It added only 400 vehicles will be allowed for the fire-setting event.

“The horizon festival has contributed to increasing local farmers’ incomes through sales of local specialties. Due to coronavirus fears, however, this year’s festival will be inevitably shifted to a non-face-to-face method,” a Gimje official said.