“Our basic plan is to find economically and politically stable markets such as Europe and the United States. We will push to be focused on Europe and make our way to the U.S. as well to eventually expand our production to 250,000 units (annually). Should there be additional demand, we will push for localization of car production and the full capacity production will be achieved within two years.” 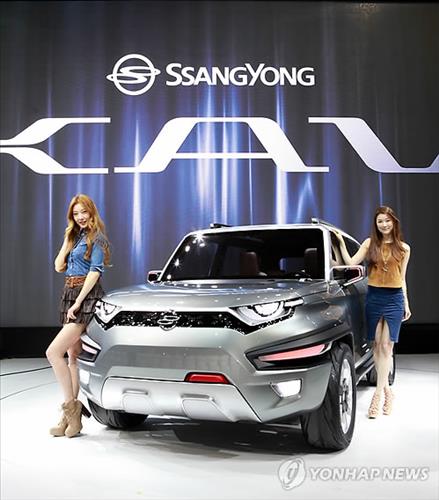 XAV, a concept sport utility vehicle of Ssangyong Motor that made its global debut at the Seoul Motor Show, is designed and developed to target the American market. (image: Yonhap)

SEOUL, April 2 (Korea Bizwire) — Ssangyong Motor, the smallest carmaker in South Korea, will push to strengthen its foothold in Europe and other “stable” foreign countries as part of efforts to shield itself from economic and political ups and downs in its export markets, the company head said Thursday.

Choi Johng-sik, CEO and president of Ssangyong Motor, also said that the company will seek to build overseas production lines should the need arise, but its immediate task is to ramp up a mere 60 percent production ratio to the full factory capacity.

Choi, who was officially inaugurated on Thursday, expressed worries over emerging markets, namely Russia, saying that they are almost collapsing. Russia, he said, used to be regarded as the “second domestic market” for Ssangyong but exports to the country recently came to an halt due to unstable economic situations.

Choi said that the XAV, a concept sport utility vehicle of Ssangyong Motor that made its global debut at the Seoul Motor Show, is designed and developed to target the American market. He did not mention specific timing of its launch there, only to say that it would take some time to reflect feedback on the vehicle.

Asked if Ssangyong Motor is pushing to sell debt to meet growing financial demand from developing new cars, he said that it is necessary to expand borrowing, adding that convertible or corporate bonds could be among possible options.

He, however, said that the debt issuance would not hurt its share price, noting that brisk sales of its cars and the overall recovery in its business would bring up the share price to 20,000-30,000 won from the current 8,000-9,000 won range.

Ssangyong Motor earlier said that it will invest about 1 trillion won over the next three years to develop new cars. The Tivoli small SUV, which was launched in January, has been selling at a better-than-expected pace, apparently appealing to younger and female customers.