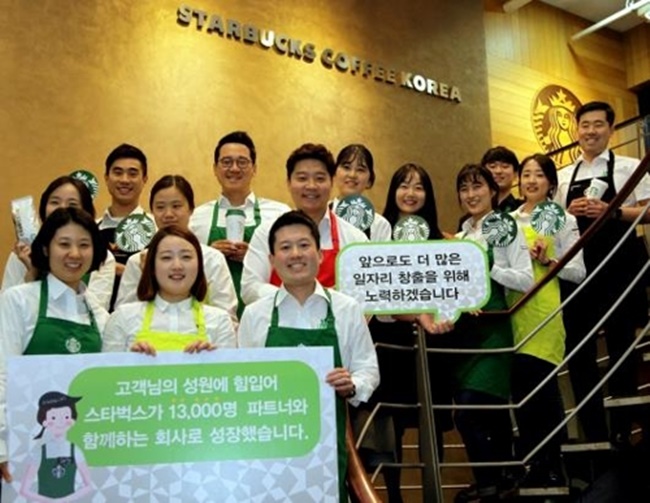 Starbucks boasts an open-door employment policy for everyone regardless of age, gender, academic background or disabilities, with all workers being guaranteed permanent employment. (Image: Starbucks Korea)

SEOUL, Mar. 5 (Korea Bizwire) — As of this month, Starbucks Coffee Korea Co. employs more than 13,000 workers in South Korea, according to a company statement on Sunday, signaling the continuing success of the coffeehouse chain.

The number of Starbucks employees has jumped an incredible 325 times in the past 19 years, since the first store opened in South Korea with 40 staff in July 1999.

Starbucks boasts an open-door employment policy for everyone regardless of age, gender, academic background or disabilities, with all workers being guaranteed permanent employment.

According to a study conducted by the Korea Economic Research Institute based on official data from the Korea Fair Trade Commission, Starbucks Korea saw the second largest increase in employee numbers among the business affiliates of the major 30 conglomerates between 2013 and 2016, the company said.

The coffeehouse chain also says that it has improved not only in terms of quantity but quality, taking the lead in ensuring workers’ rights and encouraging the employment of minorities.

In 2014, the South Korean unit of the coffee giant worked together with Ministry of the Gender Equality and Family to help female managers return to the workplace after they saw their career end due to marriage.

Under the ‘Return Mom’ policy, more than 110 workers have come back to work at Starbucks, taking on the role of assistant manager. Maternity leave of up to two years was also introduced around that time.

In 2007, Starbucks Korea became one of the first companies to actively hire those with disabilities, despite the prejudice that disabled workers are not suited for the service sector.

Currently, 232 staff with disabilities now work at Starbucks Korea, with 46 of them holding a position equivalent or superior to middle manager.

Training programs designed to prepare workers with disabilities for a wider range of work are also in place as part of efforts to help workers settle in after getting a job, Starbucks Korea explained.