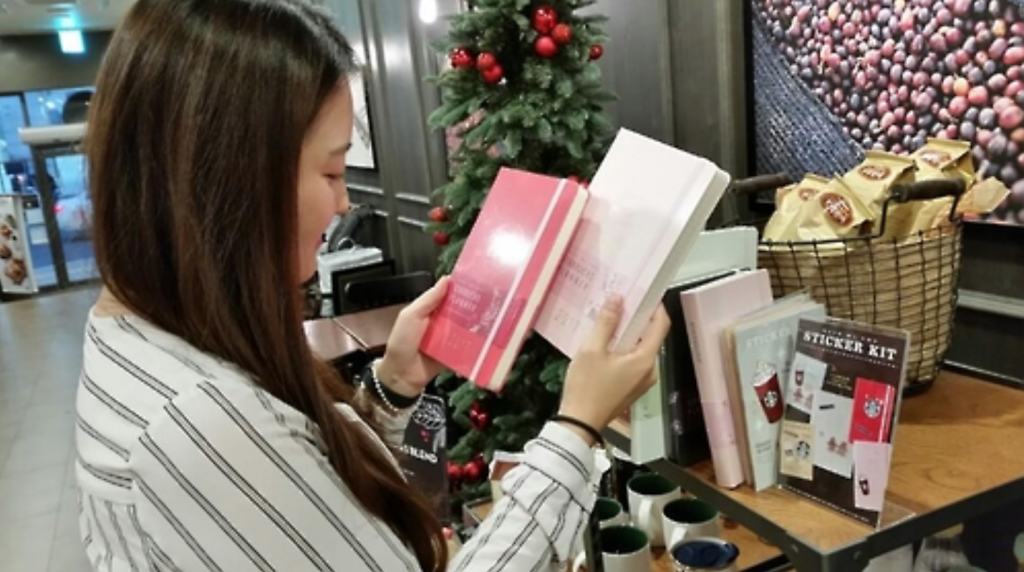 The U.S. franchise has been criticized before on what some say to be an unfair marketing strategy, using the planners to increase sales. (image: Yonhap)

SEOUL, Nov. 8 (Korea Bizwire) – Planners made by Starbucks have again become a trend item this year among young women who have formed an online market to buy and sell the diaries at marked up prices, the coffee franchise said Tuesday.

Starbucks is giving out free planners this year for 2017 in four colors for customers who purchase 17 drinks, including three Christmas seasonal beverages. Black and red planners are available for 32,500 won (US$28.40) without having to buy the drinks, but pink and mint colors have been reserved exclusively for the buyers of Starbucks drinks, making them rarer and more exclusive. Planners in these colors have appeared in the online market as used articles priced at between 50,000 won and 70,000 won. The cost of buying the required 17 drinks is about 60,000 won to 80,000 won.

“I collect Starbucks planners every year of different colors,” said Park, a 35-year-old woman in Seoul. “The store that I usually go to ran out of pink, but I want it badly. I am debating whether I should get it online.”

The U.S. franchise has been criticized before on what some say to be an unfair marketing strategy, using the planners to increase sales.

Officials at Starbucks Korea said the planners are running out twice as fast this year than last year, especially after the 2017 edition has added a pen from Moleskin. They said they know of customers who bought the 17 drinks all at once to get the planners.

“Some stores have run out of popular colors because of customers who buy multiple drinks at the same time,” said Seo Kyu-hyuck, head of the public relations team at Starbucks Korea. “The popularity of our planners seems to be growing by the year.”