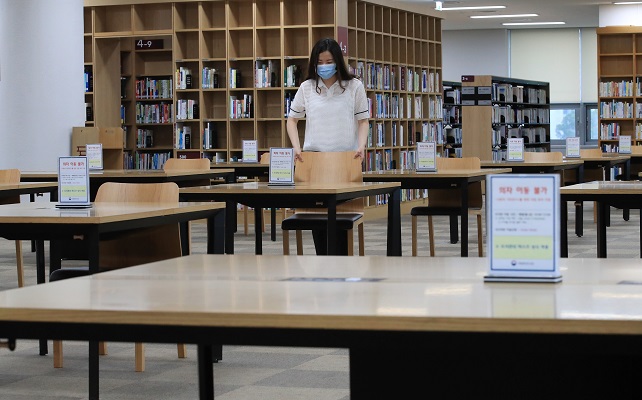 This file photo shows a staffer arranging seats for social distancing at the National Library of Korea in Seoul on July 20, 2020. (Yonhap)

SEOUL, Sept. 25 (Korea Bizwire) — Government-run cultural facilities throughout the country will reopen next week after having been shut down for over a month following a new wave of COVID-19 infections across the country, officials said Friday.

Also, 11 government-run performing arts venues, including the National Theater of Korea, the National Gugak Center and the Seoul Arts Center, will reopen Monday.

According to the ministry, the decision was reached after the government’s Central Disease Control Headquarters deemed it safe to reopen the facilities under strict distancing and sanitary measures.

Museums and libraries will be operated at 30 percent of their respective maximum capacities. Concert venues will run at 50 percent capacities.

All state-run public cultural facilities across the country have been shut down since Aug. 23 after the government placed the nation under Level 2 social distancing rules following a new wave of COVID-19 outbreaks throughout the country.