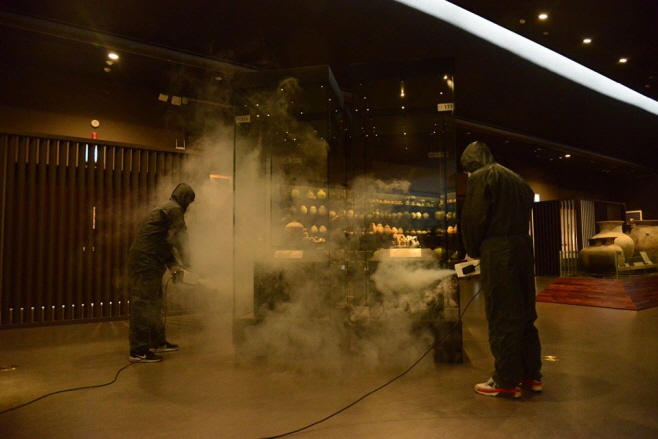 This photo provided by the Daegu National Museum shows the museum being fumigated on Feb. 21, 2020.

A total of 24 such institutes have begun or will begin to suspend their businesses as of Monday, including the National Museum of Modern and Contemporary Art (MMCA), according to the Ministry of Culture, Sports and Tourism.

On Sunday, South Korea hiked its alert against the COVID-19 virus to the highest level as the country maximized efforts to fight the spread.

As of Monday morning, South Korea has confirmed a total of 763 infection cases, with seven deaths reported from the epidemic.

On Monday, the Gwacheon and Cheongju units of the MMCA, two branches of the National Library of Korea and nine provincial national museums temporarily closed their doors.

This was in addition to the closure of the MMCA’s Deoksu Palace unit, the Daegu National Museum and the National Library of Korea, Sejong, earlier in the month, the ministry said.

On Tuesday, the Seoul branch of the MMCA, the National Museum of Korea and its three regional branches, as well as three other history museums in Seoul, will follow suit.

The ministry said it will announce the resumption of the museums in accordance with progress in the fight against the virus.