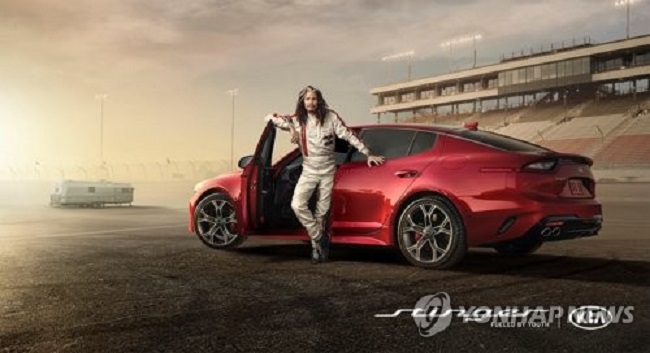 In the 60-second ad featuring Aerosmith’s lead singer Steven Tyler, the rock and roll icon turns the Kia Stinger into a time machine by racing the car in reverse around an oval racetrack to the tune of his timeless hit “Dream On” and regains his youth.

At the end, he finds a group of screaming fans running toward Tyler who is suddenly his 25-year-old self. His youthful persona was accurately recreated with advanced computer graphic technology.

“As one of the youngest mainstream car companies in the U.S., our youth — and the fearlessness that comes with it — is Kia’s strength, and the youthful mindset we share with Steven Tyler and Emerson Fittipaldi is on full display in our Super Bowl ad,” Saad Chehab, vice president in charge of marketing communications at Kia Motors’ America, said in a statement.

Two-time Formula One and Indianapolis 500 champion Fittipaldi looks on approvingly as Tyler approaches a Kia Stinger mated with GT’s twin-turbo, 365-horsepower engine on an abandoned racetrack, it said.

The ad starts with Kia’s “Fueled by Youth, A State of Mind” marketing campaign, with the message “Feel Something Again” at the end.