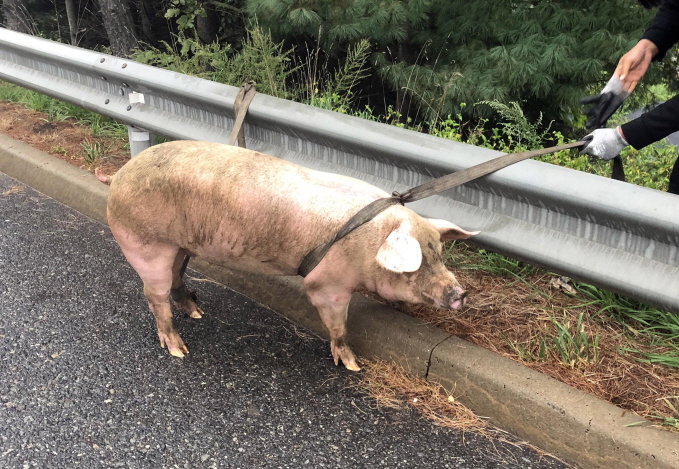 A pig being captured on the northbound lanes of the West Coast Highway in Ansan near Seoul on Oct. 5, 2018. (image: Yonhap)

ANSAN, Oct. 5 (Korea Bizwire) — Seven pigs en route to a slaughterhouse fell out of a truck and roamed around on a highway in Ansan near Seoul for more than two hours, causing traffic congestion at rush hour, police said Friday.

Police received a report around 6:45 a.m. that pigs were walking around a tunnel on the northbound lanes of the West Coast Highway leading to Seoul.

Police captured them two hours later. The 4.5-ton vehicle was transporting 50 pigs from Anseong, south of Seoul, to a slaughterhouse in Gimpo, west of Seoul.

The driver was initially not aware that they had fallen off, according to police. He discovered the situation after a while and reported it to the state-run Expressway Corp.

The incident caused no traffic accidents but did cause a rush-hour traffic jam as police closed part of the highway.

Police said they will fine the driver of the vehicle for violation of traffic rules.