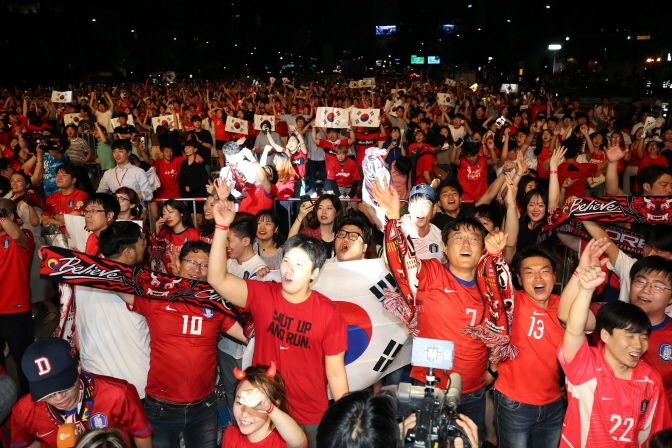 SEOUL, Jun. 14 (Korea Bizwire) — Massive crowds are expected to gather for street cheering nationwide over the weekend as South Korea chases its first-ever FIFA U-20 World Cup title, going up against Ukraine in the final.

Preparations for celebratory public viewings of the game, known as “street cheering,” are under way in South Korea ahead of the kick off in Poland at 1 a.m. Sunday (South Korea time).

For key football matches, South Korean fans, clad in red shirts, often come out of their homes to cheer their side on, turning plazas and other public places into seas of red.

This spectacle is likely to be repeated over the weekend as Koreans root for the young players at the U-20 World Cup.

South Korea have never won a men’s FIFA tournament. The country’s previous best performances at FIFA-organized men’s competitions were the fourth-place finishes at the 1983 U-20 World Cup in Mexico and the 2002 World Cup in South Korea and Japan.

If Korea beat Ukraine, they will also become the first Asian country to win the U-20 World Cup championship.

Korean football fans are all the more excited about the possible victory as South Korea, coached by Chung Jung-yong, are riding a five-match winning streak into the final.

There is even a call to extend military service exemptions to the U-20 players — more than 15,000 people have signed a petition for it on the website of the presidential office, Cheong Wa Dae. 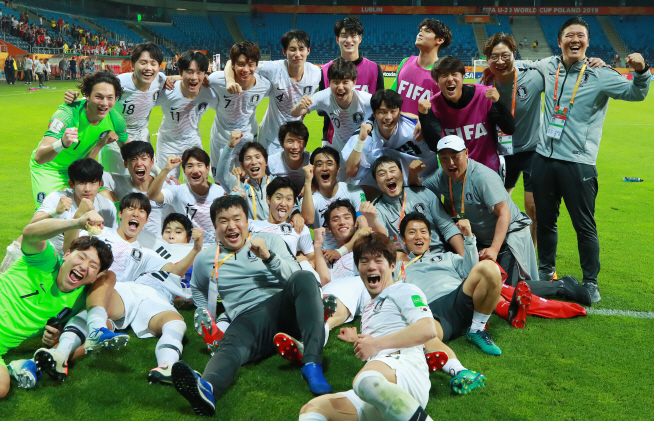 South Korean players and coaches celebrate their 1-0 victory over Ecuador in the semifinals of the FIFA U-20 World Cup at Lublin Stadium in Lublin, Poland, on June 11, 2019. (Yonhap)

According to the Seoul metropolitan government, Sangam World Cup Stadium in western Seoul will accommodate football fans for a cheering event starting at 11 p.m. on Saturday.

The Korea Football Association (KFA), the country’s football governing body, originally planned to use Gwanghwamun Square in central Seoul, one of two main locations for street cheering in the capital, the other being Seoul Plaza.

But it reportedly canceled its plan out of security concerns as ultra-right wing party members have recently occupied part of the square to call for the release of jailed former President Park Geun-hye.

The Seocho Ward Office in Seoul said it will hold a street cheering event near the bustling Gangnam subway station.

“As the match will be held after midnight, we picked the station as the venue to help football fans use public transportation when they go back home,” an official said.

In Gyeonggi Province, which surrounds Seoul, city authorities have organized cheering events that will include replays of matches by the Korean team, as well as concerts.

Ansan, south of Seoul, is buoyant in preparing for the celebrations as Captain Hwang Tae-hyeon belongs to Ansan Greeners FC, which is owned by the city.

In Suwon, south of Seoul, football fans are expected to fill the World Cup stadium there to watch the match on a large screen.

In the southern port city of Busan, pre-match events such as concerts will be held to boost the festive mood. A big screen will be set up at the popular Haeundae beach.

Meanwhile, the KFA will hold a ceremony at Seoul Plaza on Monday to welcome the squad home. It will be broadcast live by KBS, MBC and SBS.