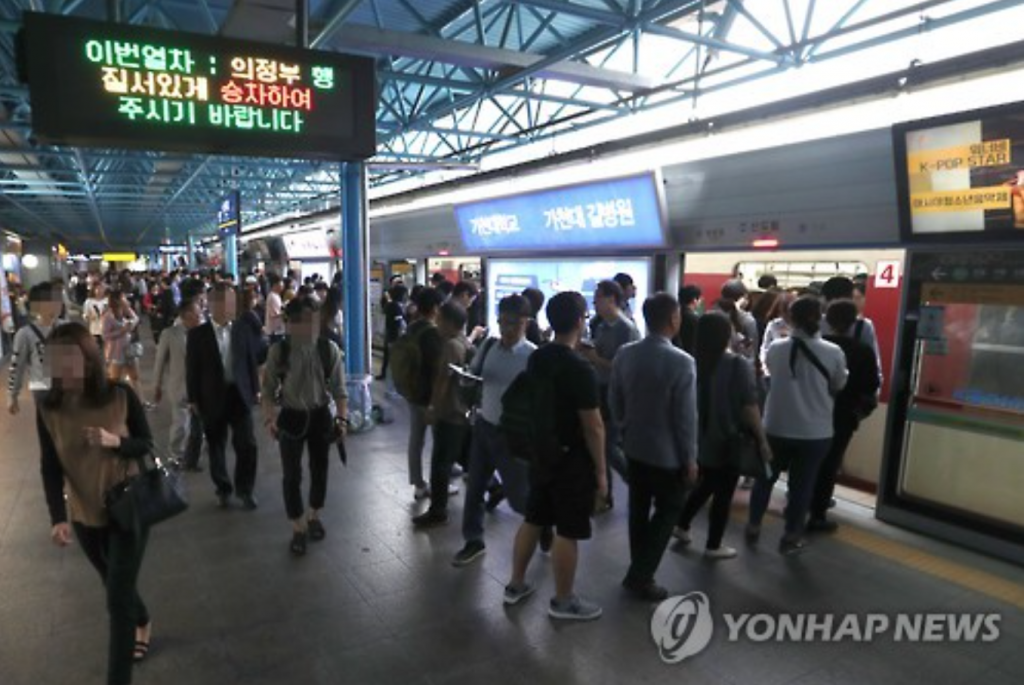 Citizens use the subway at Sindorim station on line 2 in Seoul on Sept. 27, 2016. The subway and railway workers went on a joint strike that day to protest against the government’s scheme to implement a merit pay system. (image: Yonhap)

The members of Seoul’s two major subway labor unions launched the walkout at 9 a.m., the unions said. The joint strike by subway workers from both unions — from lines 1 to 4 and lines 5 to 8 — is the first in 12 years. The participation rate is yet to be determined.

The Seoul Metropolitan Government said it has assigned temporary workers, including city officials, to prevent major disruption during the rush hour period.

Afternoon operations from Tuesday to Monday, however, will be reduced to around 80 to 85 percent of their normal levels, it said.

On the same day, the Korean Railway Workers’ Union also went on strike as of 9 a.m.

“The Korea Railroad Corp. (KORAIL) unilaterally changed the wage system without properly going through negotiations with the labor union,” it said.

The management and unionized workers continued to seek a resolution up till late Monday night but could not reach an agreement.

The railway operator said services in the capital area will operate at normal levels and that it plans to provide other means of travel, such as buses, to cover the routes that have reduced services.

The joint strike by railway and subway workers is the first since they walked out for six days in 1994.

It is in line with a series of labor movements carried out by union workers in the public sector against the new wage system, which started last week with the Federation of Korean Public Industry Trade Unions.

The merit pay system is part of the Park Geun-hye administration’s efforts to boost labor flexibility to create more jobs, especially for the young generation.

The labor sector, however, is against the scheme, saying it will be used to allow companies to fire employees more easily.

The Ministry of Land, Infrastructure and Transport, meanwhile, held a press conference and urged railway union members to go back to work.

“We make it clear that if the union ignores the inconvenience of the public and continues with their illegal strike, we will deal sternly based on law and principal,” vice land minister Choi Jeong-ho said at the government complex in Sejong.