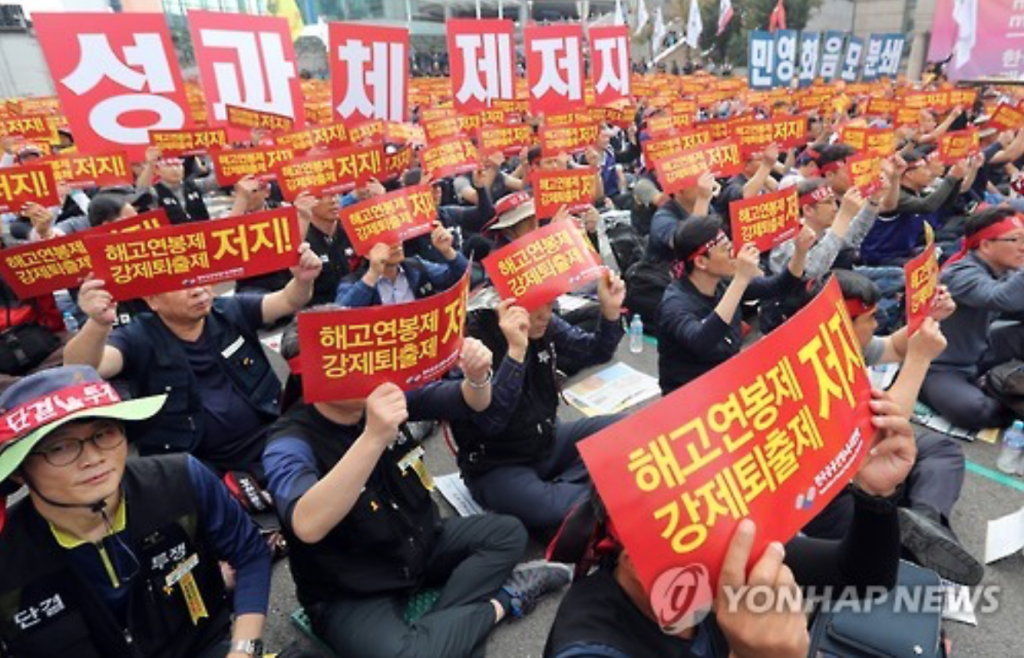 Members of the Federation of Korean Public Industry Trade Unions chant slogans during a rally in central Seoul on Sept. 22, 2016, to mark the start of a strike over a government plan to adopt a merit pay system for public workers and to privatize state firms. (image: Yonhap)

The walkout scheduled to begin Tuesday is part of a series of strikes carried out by union workers in the public sector, which started last week with the Federation of Korean Public Industry Trade Unions.

The Seoul Metropolitan Government said subway services will run without major disruption during the rush hour period, as the government will use temporary workers, including retired employees, to fill in the vacancies.

Afternoon operations from Tuesday to next Monday, however, will be reduced to around 80 to 85 percent of their normal levels should unionized workers go on strike as planned, it said.

The strike by subway workers, if carried out, will be the first in 12 years since the last one took place in 2004.

The Ministry of Land, Infrastructure and Transport also has said the country’s railway services will run without any major disruption. It plans to expand other means of transportation, such as buses, to cover the routes with reduced train services.

The government and unionized workers have said they will continue to seek a resolution until the very start of the strike, but those close to the negotiations said chances of an agreement are slim.

“We cannot accept any illegal strike that adversely affects public convenience,” Transport Minister Kang Ho-in said. “We urge the unions to withdraw their plans to go on a walkout and go back to where they should be.”

The new wage system is part of the Park Geun-hye administration’s efforts to boost labor flexibility to create more jobs, especially for the young generation.

Some 120 public companies and institutions are in the process of adopting the new wage program, with some of their unions protesting the move.