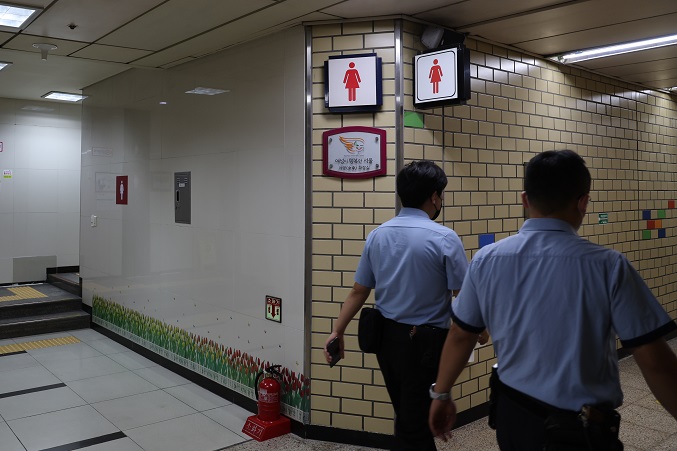 Authorities inspect the ladies’ restroom at Sindang Station on subway Line No. 2 in central Seoul on Sept. 15, 2022, a day after a female subway attendant was killed by a former colleague. (Yonhap)

SEOUL, Sept. 15 (Korea Bizwire) — Police have arrested a 31-year-old subway station worker for killing a female colleague in the public restroom of a subway station in Seoul, one day before a court was set to sentence him on charges of stalking her.

The Seoul Metro employee, surnamed Jeon, allegedly stabbed the victim in her 20s to death in the ladies’ restroom at Sindang Station on Line No. 2 on Wednesday evening.

He was apprehended at the scene by other subway workers and ordinary citizens, and then handed over to police around 9 p.m.

After the stabbing, the victim called for help via an emergency bell in the restroom. She was taken to a hospital in a state of cardiac arrest but was pronounced dead 2 1/2 hours later.

Police said the suspect, wearing a disposable hair cap, lurked in the station for about 70 minutes before spotting, following and killing the victim.

Jeon told police that he had planned the crime for a long time and had acquired the weapon in advance.

The killing occurred one day before a court was set to sentence him on five counts of charges including stalking, illegally filming and threatening her. The prosecution has demanded nine years in prison.

The victim had filed two stalking complaints against him, and he was indicted in February and June.

The two have known each other since entering Seoul Metro the same year.

Jeon was dismissed in October after police began investigating him, officials said.

Police filed for a formal arrest warrant for him later in the day.

Meanwhile, Prime Minister Han Duck-soo voiced strong regret over the murder and instructed relevant ministries and law enforcement authorities to come up with measures to prevent such a crime from happening again, the prime minister’s office said.

“To prevent ordinary citizens from being victimized by such an unfortunate incident, relevant ministries should thoroughly investigate the cause and establish strong measures to prevent a recurrence,” Han said.