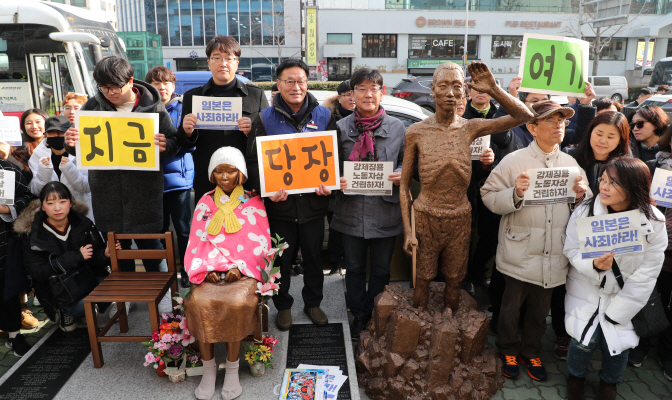 Members of a coalition of South Korean civic groups rally in front of the Japanese Consulate in South Korea’s second largest city of Busan on Dec. 26, 2018, to erect a statue next year to commemorate Korean victims of forced labor under Japan’s colonial rule. (Yonhap)

BUSAN, Dec. 26 (Korea Bizwire) — A coalition of South Korean civic groups on Thursday reaffirmed its pledge to erect a statue in front of the Japanese Consulate in South Korea’s second-largest city of Busan next year to commemorate Korean who suffered forced labor under Japan’s colonial rule.

Members of the coalition, including the Busan Movement Headquarters for Social Reform and Elimination of Accumulated Ills, held a rally near the consulate to push for the installation of the bronze statue symbolizing Koreans conscripted to work for Japan.

They also called for the South Korean government to discard a 2015 accord between Seoul and Tokyo to resolve Japan’s wartime sexual enslavement of Korean women.

During the rally, Kim Jae-ha, chief of the regional headquarters in Busan of the Korean Confederation of Trade Unions, said it plans “to demand a formal apology from the Japanese government over the forced labor issue.”

The coalition plans to install the statue on the anniversary of a nationwide independence movement, which falls on March 1. Two other dates the collation has considered for the installation of the statue are Labor Day, on May 1, and the anniversary of Korea’s liberation from the colonial rule, on August 15.

On May 1, the civic groups attempted to erect it next to another statue erected outside the Japanese diplomatic mission to represent Korean “comfort women” forced to work in Japanese wartime military brothels.

But the group was blocked by police from doing so and the statue was damaged in the ensuing melee. The statue is being repaired at an unspecified location in Gyeonggi Province, near Seoul.

Japan ruled the Korean Peninsula from 1910 to 1945, a time during which historians say that millions of Koreans were coerced into labor. They also estimate that up to 200,000 women, mostly from Korea, were forced to work in front-line brothels for Japanese troops during World War II.