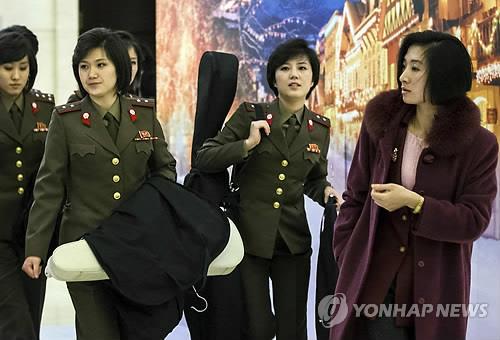 The Moranbong Band was scheduled to perform for three days in Beijing from Saturday, in an apparent sign of warming relations between the two countries. (Image courtesy of Yonhap)

BEIJING, Dec. 12 (Korea Biwire) – Performances by North Korea’s all-female propaganda band in Beijing were canceled, an official at a Chinese theater where it was to perform said Saturday, with members of the band abruptly heading back to Pyongyang.

The Moranbong Band had been scheduled to perform for three days in Beijing from Saturday, in an apparent sign of warming relations between the two countries.

“The performance was canceled,” said the official at the National Center for the Performing Arts in Beijing. The official declined to give his name.

Officials at China’s foreign ministry were not immediately available for comments on Saturday.

Chinese and Japanese media reports say members of the North Korean band were seen departing for Pyongyang earlier in the day.

It was not immediately known why the North Korean band returned home hours before the performances, which are not open to the public and an invitation-only, were to begin.

Some North Korean watchers in Beijing speculated that Pyongyang might have canceled the performances because top Chinese leaders, including President Xi Jinping, declined to attend.

Others said there might have been complaints from North Korea over media coverage of the band’s leader, Hyon Song-wol, who is reportedly a former girlfriend of North Korean leader Kim Jong-un.

The band’s “friendship performances,” described by North Korea’s state media, were seen as the latest sign that Pyongyang is trying to mend ties with Beijing after years of strain following the North’s third nuclear test in early 2013.

Since Liu Yunshan, the Chinese Communist Party’s fifth-ranked official, visited Pyongyang in October and held talks with North Korean leader Kim, there have been signs of improvement in bilateral ties.

The band, known for its interpretive performances of the totalitarian state’s propaganda songs and Western pop music, including the “Theme from Rocky,” was formed in 2012 following an order by North Korea’s young leader Kim.