Grace Ford, COO of Sundance, commented “During the third quarter our operated capital expenditures increased as we completed wells in our primary focus areas of McMullen, Atascosa and Dimmit Counties.  Two wells were brought into production on our Tyler Ranch lease in McMullen County and were completed utilizing our Gen2 design with ~2,400 pounds of proppant per foot and 200 foot stage spacing.  Early production data is exhibiting rates above our type curve, both for oil volume and cumulative BOE production.  In Atascosa County we completed one well on our Peeler Ranch lease and it too is demonstrating increased production rates above our type curve.  This was the first well on this lease drilled and completed by Sundance.  Changes in the design compared to legacy wells included a focus on drilling in zone, tighter perforation spacing, an increase in proppant per foot, higher pump rates, and a change in proppant selection.  In Dimmit County we completed three wells.  Our completion improvements focused on maximizing perforation efficiency utilizing diversion techniques and executing controlled flow-back.  Preliminary micro-seismic interpretation from one of our Dimmit County completions is showing improvements in reservoir contact with recent changes in design.  Early production is on, or slightly above the type curve, but we believe that the wells have yet to reach their peak oil production.  Additionally we refraced five wells in McMullen County in accordance with our Schlumberger agreement.  All five wells are in very early stages of controlled flow back.  We will continue to monitor these aforementioned results and, once we have sufficient data, we will apply the findings to our 2017 development plans.”

“The third quarter of 2016 represents a return to activity levels that we believe will provide substantial growth in production and cash flow for Sundance for the remainder of 2016 and into 2017”, stated Eric McCrady, CEO of Sundance. “Among our goals as we increased capital expenditures this year was to reduce our cash costs on a per BOE basis and we are pleased with the resulting decrease in lease operating expenses and G&A by 38% and 32% respectively compared to the year ago period.  We continued expanding our footprint in the Eagle Ford and the Company now has nearly 46,000 net acres in the play compared to just over 7,000 acres when we entered the basin in 2013.  Another goal of management is to increase the profile, market liquidity and awareness among North American based investors in the Company.  In September we implemented an ADR listing on NASDAQ under the symbol SNDE to provide a US dollar based vehicle for interested parties to consider for investment.  We also retained Jon Kruljac, who has over 30 years of experience in investor outreach and capital markets, to assist the Company in garnering attention from institutional investors.  These efforts have already resulted in three published research reports with buy recommendations on SNDE from US based investment banking firms.  We are embarking on a robust marketing program over the next twelve months to further the awareness of the Company and we will begin hosting quarterly conference calls in 2017 to provide consistent and timely updates regarding the Company’s progress and results congruent with other US reporting companies.  We will be providing production and capital expenditure guidance for Q4 of 2016 and the full year 2017 in a press release in December.” 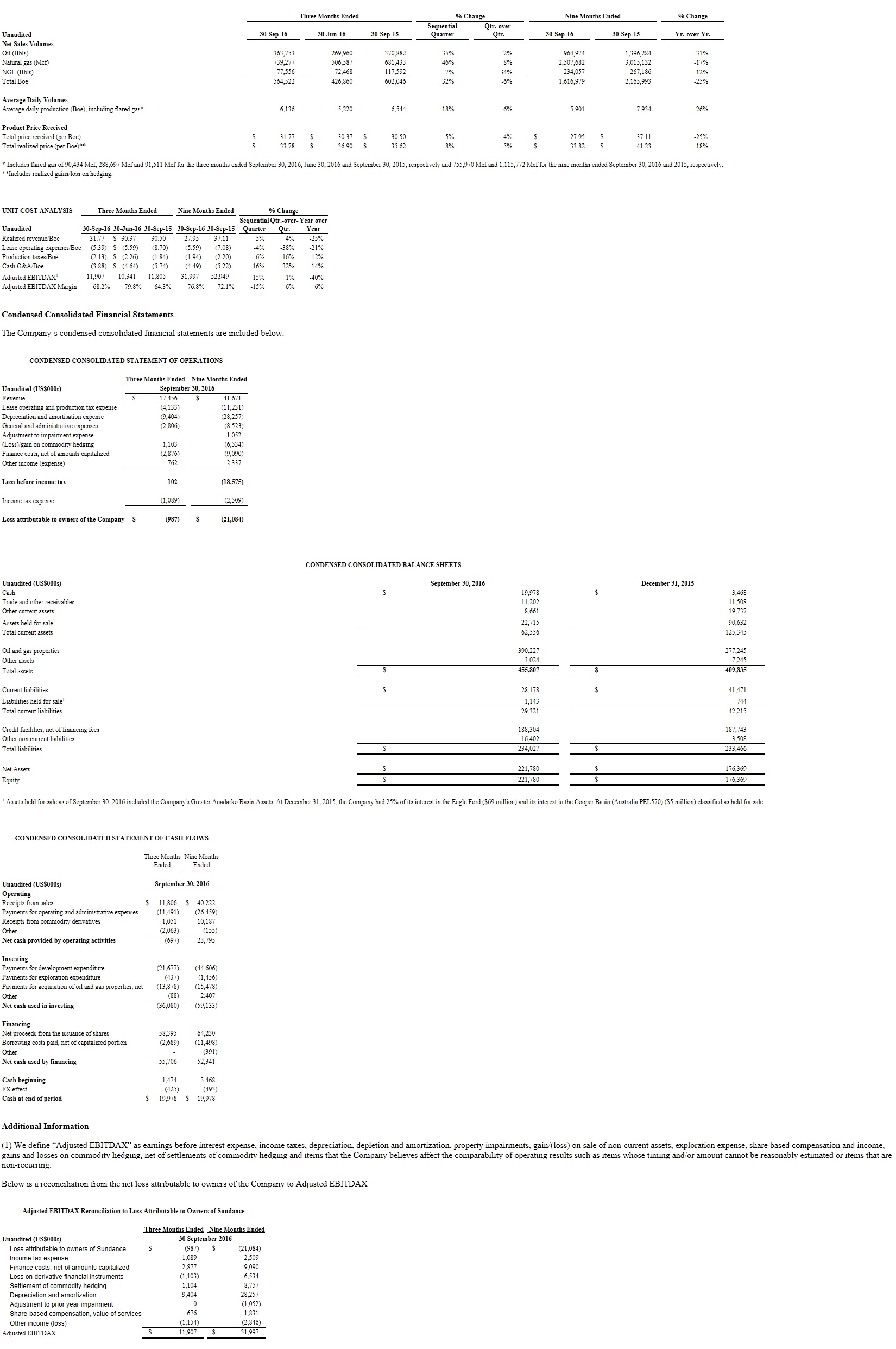 The Company reports under International Financial Reporting Standards (IFRS).   All amounts are reported in US dollars unless otherwise noted.

The Company’s full Unaudited Activities Report as filed with the Australian Securities Exchange (ASX) and Securities and Exchange Commission on Form 6-K for the Quarter Ended September 30, 2016 can be found at www.sundanceenergy.net.

The Company is focused on the acquisition and development of large, repeatable oil and natural gas resource plays in North America. Current activities are focused in the Eagle Ford and Greater Anadarko Basins.  A comprehensive overview of the Company can be found on Sundance’s website at www.sundanceenergy.net.