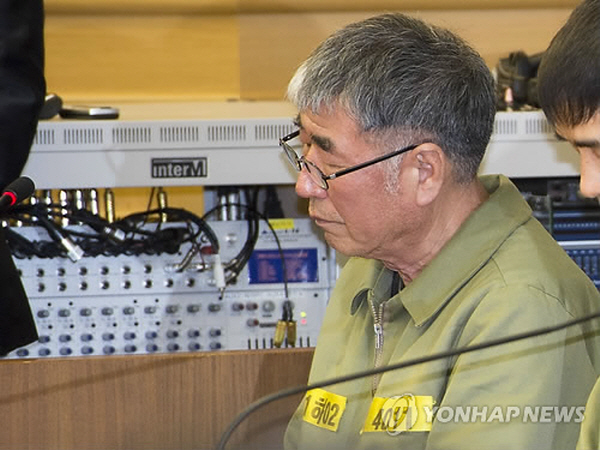 Lee ordered the passengers to remain where they were and failed to have them evacuate while he was among the first to be rescued. (image: Yonhap)

GWANGJU, Apr. 28 (Korea Bizwire) — The captain of the sunken ferry Sewol was sentenced to a life term for murder at an appeals court here Tuesday.

Overturning a lower court ruling that acquitted Lee Joon-seok of murder, the Gwangju High Court convicted him of murdering 304 passengers aboard the ferry that sank off the southwest coast on April 16, 2014.

The ferry was en route to the southern resort island of Jeju from Incheon, west of Seoul. Most of the 304 victims were high school students on a field trip.’

A lower court had convicted the 70-year-old of gross negligence and dereliction of duty, giving him a 36-year prison term.

Lee ordered the passengers to remain where they were and failed to have them evacuate while he was among the first to be rescued, the court said.

“The captain prematurely ended the students’ lives and scarred their parents for life,” said an emotional Judge Seo Kyeong-hwan, who fought back tears as he read the ruling. “His actions tarnished South Korea’s image and could not be justified under any circumstances.”

In the ruling, the court threw out the murder conviction of the ship’s chief engineer, identified only by his surname Park, and commuted his prison term from 30 to 10 years.

The prison terms of 13 other crew members were reduced, and range from one and a half years to 12 years.

Less than half a dozen family members watched the proceedings on TV from a courthouse in Ansan, Gyeonggi Province, where the students went to school.

One of them, who lost her only child, said the sentences delivered to the crewmen were too light.

“All of them are responsible for abandoning the children, so they should be given heavier sentences,” she said.

South Korea announced last week plans to salvage the ferry which remains at the bottom of the sea along with nine missing bodies.

The retrieval is expected to begin in September and take up to one and a half years.

The government is forecast to spend up to 150 billion won in the process, although there may be added costs down the road.