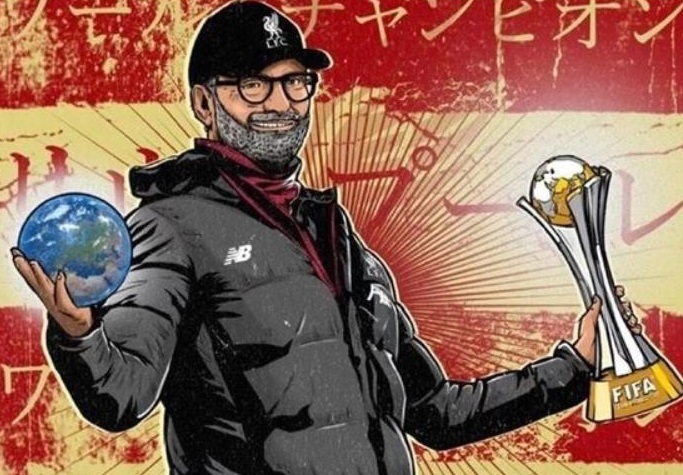 The image shows Liverpool manager Jurgen Norbert Klopp holding the earth in one hand and the championship trophy in the other, with a backdrop that uses the Japanese Rising Sun Flag. (image: Liverpool FC)

SEOUL, Dec. 23 (Korea Bizwire) — Liverpool FC is being criticized for re-posting an image of the Japanese Rising Sun Flag on its website a day after apologizing to South Korean fans for uploading a video that shows the Japanese symbol of aggression often equated to the Nazi swastika.

The image shows Liverpool manager Jurgen Klopp holding the earth in one hand and the championship trophy in the other, with a backdrop that uses the Japanese Rising Sun Flag.

On Friday, Liverpool posted a video of CR Flamengo’s Zico showing outstanding performance at the Intercontinental Cup held in Tokyo, Japan in 1981, where the Japanese Rising Sun Flag motif was used as the video’s thumbnail image.

The video was met with strong criticism from South Korean fans, who were additionally offended after a news article introducing the newly recruited Japanese football player Takumi Minamino was placed right above the video.

Liverpool delivered a statement of apology in English and Korean via its Facebook account soon after, but the team posted an image of a Japanese Rising Sun Flag again the next day, leading fans to question the club’s sincerity.

“We plan to submit a formal complaint to the EPL secretariat, the Football Association, and FIFA.”