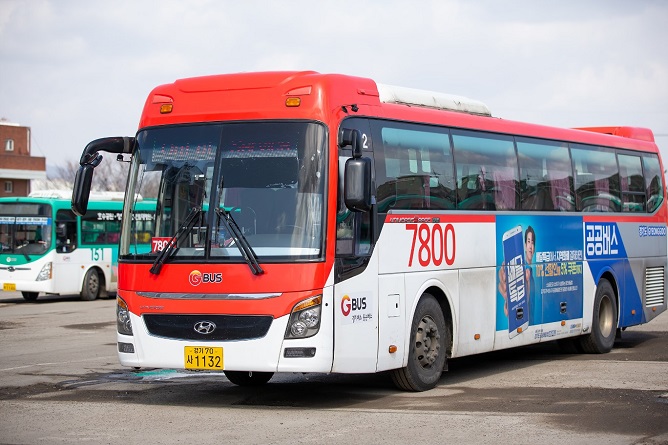 A bus linking Gyeonggi provincial cities to Seoul is parked at a company in Suwon, south of Seoul. (Yonhap)

SUWON, Feb. 25 (Korea Bizwire) — The city of Suwon in Gyeonggi Province has announced a plan to establish and implement a ‘smart safety service,’ including a drowsy driving detection system for buses operating in regular lanes from next month.

The smart safety service, which includes the emergency rescue function in the event of accidents, is being rolled out on about 500 inter-city and intra-city buses operating in Suwon.

With a camera installed in the bus’s steering wheel and a high-precision Global Navigation Satellite System (GNSS), the drowsy driving detection system makes an automatic judgment about drowsy driving by analyzing factors such as the frequency of the driver’s blinking, bus speed and vibration, and lane departure.

If the system detects drowsy driving, the GNSS installed around the driver’s seat generates an alarm sound. If the situation remains unchanged, the alarm sound gets louder and buses installed with an emergency brake system will stop automatically.

In addition, the system can record and save a driver’s driving habits, including abrupt acceleration or braking.