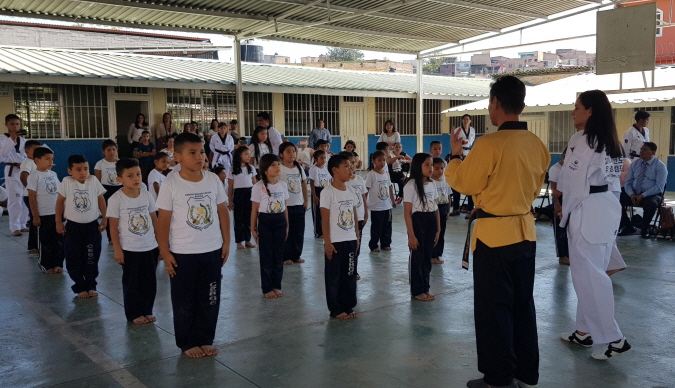 A regular taekwondo class under way at an elementary school in Tegucigalpa on Feb. 18, 2019. (image: South Korean Embassy in Honduras)

MEXICO CITY, Feb. 18 (Korea Bizwire) — Taekwondo, a Korean martial art, has been adopted as a part of the regular curriculum at public elementary schools in Honduras, diplomats said.

A ceremony was held at an elementary school in Tegucigalpa, the capital of Honduras, on Tuesday to celebrate the launch of the first regular taekwondo class in Latin America, they said.

The regular taekwondo classes will be held for about 1,800 pupils at 15 elementary schools, including 12 in Tegucigalpa, one in San Pedro Sula and two in El Progreso.

The taekwondo education at Honduran public schools is not elective but mandatory and is taught by Honduran masters, not Korean teachers. Second- and third-grade students attend the taekwondo class twice a week.

Taekwondo classes have been held for officials and citizens in Mexico, Argentina and other Latin American countries. But it is the first time in Latin America that public schools have adopted the Korean martial art as part of the regular curriculum.

“We expect the taekwondo public education will spread in other Latin American countries as well,” Shin said.

In Honduras, where 9 million people live on a land slightly bigger than South Korea’s, taekwondo is recognized as the second most popular sport after football.

Porfirio Lobo Sosa, who served as president of Honduras from 2010 to 2014, has a third-degree black belt in taekwondo and was awarded an honorary ninth-degree certificate from the World Taekwondo Federation during his visit to South Korea in 2011.