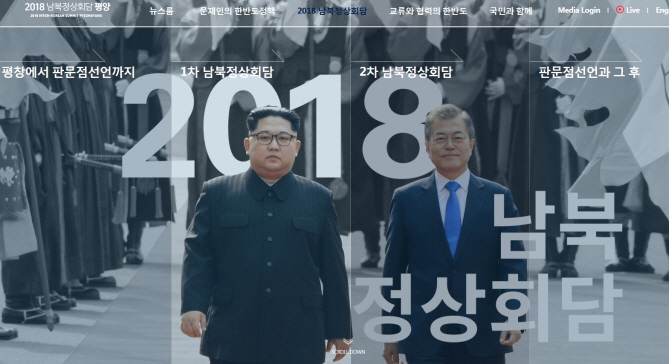 The basic features remain unchanged, with “News Room” on the top to provide photos, briefings and live videos.(image: Yonhap)

SEOUL, Sept. 14 (Korea Bizwire) — The Blue House announced on September 14 it had launched a new edition of the Inter-Korean Summit webpage (www.koreasummit.kr) to deliver news of the upcoming talks scheduled for September 18.

Based on the online platform that was used for the first Inter-Korean Summit on April 27, the Blue House added the peace-building steps and developments that were made after the Panmunjeom declaration.

The basic features remain unchanged, with “News Room” on the top to provide photos, briefings and live videos.

The efforts made by both countries to fulfill the declaration are introduced in “2018 Inter-Korea Summits”, while the history of inter-Korean relations is available under the tab “Inter-Korean Relations”.

Videos of celebrities voicing their support for the peace-making policies are featured on “Peace Wish Relay.” “The People’s Desires” displays the thoughts shared by the public with relevant hash-tags on social media.

“Make Peace Profile” creates automated profile pictures for visitors, with the event’s slogan, “Peace, a New Start”. These features are only available in Korean.

On the English site, instead, the platform offers award-winning video clips themed “Peace on the Korean peninsula” by foreigners, posted at the Talk Talk Korea contest in 2018.

The contest, administrated by the Korean Culture and Information Service, is an annual event for foreigners to post video clips related to Korea.

The Blue House is planning to hold events both online and offline to highlight the coming summit talks.

The quiz show app JAM Live is going to service quizzes on the inter-Korean summit on September 18, the first day of the event.

During the weekend, the footbridge where the two leaders took a walk in April will be reenacted in parts of Seoul.

It will be available at the Gyeongui Line Forest Park in Yeonnam-dong on September 15 and 16, and at Gwanghwamun Plaza on September 17.