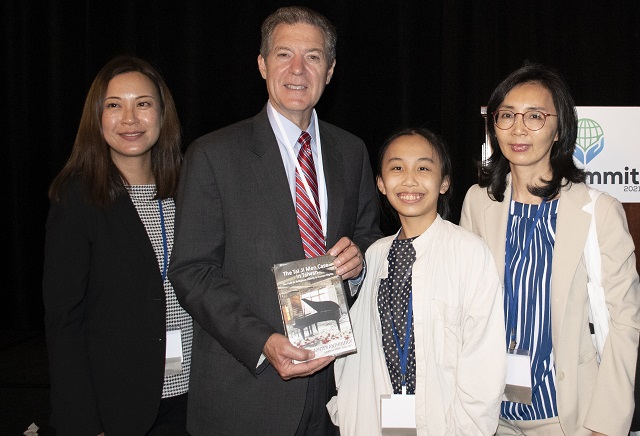 Representatives of the Action Alliance to Redress 1219 present former U.S. Ambassador-at-large for International Religious Freedom Sam Brownback, co-chair of the IRF Summit 2021, with two books about safeguarding human rights, justice, and religious freedom: Who Stole Their Youth and The Tai Ji Men Case in Taiwan: A Bitter Winter Anthology on July 13, 2021 during the IRF Summit.

WASHINGTON, July 14 (Korea Bizwire) — The International Religious Freedom (IRF) Summit is being held at the Omni Shoreham Hotel in Washington D.C. on July 13–15, and over 1,000 representatives from government agencies and civil society organizations are attending the event in person while over ten thousand people are participating virtually, being the largest and most important religious freedom event of the year. As a Summit partner, the Action Alliance to Redress 1219 hosted a workshop titled “A Question of Justice: The Tai Ji Men Case” and launched two new books about safeguarding human rights, justice, and religious freedom, documenting the Tai Ji Men case, a case of violation of religious freedom and human rights in Taiwan, and over 1,200 advocates participated in the event for religious liberty either in person or online.

As a partner of the Summit, the Action Alliance to Redress 1219 (ACT1219) is dedicated to rectifying the Tai Ji Men case, said Jeff Kuo, a representative of ACT1219. Tai Ji Men is a spiritual group with various chapters in Taiwan and the U.S. It has self-funded trips to 101 nations to promote love, peace, and conscience. A video presentation showed that Tai Ji Men has been highly praised by President Tsai Ing-wen, three former presidents of Taiwan, and other leaders in Taiwan and around the world for its peace endeavors.

However, such an avid promoter of love and peace has been persecuted for 24 years by a few unscrupulous bureaucrats in Taiwan as shown in a movie titled “A Question of Justice: The Tai Ji Men Tax Case in Taiwan,” presented in the workshop. The movie was directed by Prof. Massimo Introvigne, an Italian sociologist and the founder and managing director of the Center for Studies on New Religions (CESNUR).

Although Taiwan is hailed as a beacon of democracy in Asia, it has a complicated past. After the martial law period ended in Taiwan in 1987, there was a transition period during which the government targeted groups of self-cultivation. One such instance was in 1996, when the first direct presidential election took place in Taiwan and the government went after religious movements and organizations of self-cultivation that did not show support for the President during the election. Even though Tai Ji Men took no political stance, it was caught in the crossfire.

“Since the late 1970s, the Association of World Citizens has worked closely with the Special Rapporteur on Freedom of Religion or Belief with the UN Human Rights Council,” said Michael Selfridge, representative of the Association of World Citizens, adding, “Tai Ji Men Qigong Academy, led by Dr. Hong, Tao-Tze, has been our devoted ally. We are deeply saddened to see such an ally, who has been consistently helping us to resolve global conflicts, human rights, peace, and sustainable living, but was persecuted and attacked by some rogue officials in the Taiwanese government who abused public power.”

Pamela Chen, on behalf of thousands of worldwide Tai Ji Men dizi (disciples), noted that at the time, Tai Ji Men was wrongfully accused of fraud and tax evasion, and on July 13, 2007 Taiwan’s Supreme Court found Tai Ji Men not guilty of tax evasion, violation of the Tax Collection Act, or any other charges, and Tai Ji Men did not owe any tax. A few rogue bureaucrats in Taiwan have been violating Tai Ji Men members’ religious freedom for over two decades, ignoring the court decision and imposing unjustified and heavy taxes on Tai Ji Men, said Chen.

Last year, Tai Ji Men’s sacred land for self-cultivation was even confiscated, which has generated large street protests and considerable international attention, lamented Chen, adding that today marks the 14th anniversary of the acquittal of Tai Ji Men, but the injustice against this organization remains.

Kenneth Jacobsen, professor of law at Temple University, Philadelphia, the U.S. and former advisor to U.S. President Bill Clinton, has studied the Tai Ji Men case for years and written a paper on this case. In response to the wrongdoings committed by the unscrupulous bureaucrats, he said at the workshop, “I call upon the president of Taiwan. I call upon the leaders of Taiwan to fix the mistakes of the past as I have said before to allow errors to continue, to perpetuate mistakes that were made in the past is as bad if not worse than committing those mistakes in the first place. This is an atrocity. It’s a tragedy too. It is unjust. As someone who respects and has lived his life and career respecting the rule of law. This is offensive, and it should end now.”

Prof. Massimo Introvigne, through a video message, regretted that he could not attend the event in person and highlighted why it is significant: “The first reason is that it continues the extraordinary work done by Ambassador Brownback for several years on behalf of religious liberty. The second reason is, this side event is about Taiwan, a country whose culture very much I admire and love. And the third is the side event is about Tai Ji Men and its quest for justice.”

“Why are thousands of people in the street?” asked Prof. Introvigne and then he said, “Not for a domestic Taiwan tax law issue. Not for a private problem of Dr. Hong. But for a question of principle and of justice, and of religious liberty. And I believe it’s for this reason that reconstructing this case, which is a tax case but it’s mostly a freedom of religion or belief case, is important within the context of this magnificent event.”

Brenda Chen, one of the tens of thousands of victims in the Tai Ji Men case, with tears in her eyes, recollected the Tai Ji Men incident: “Even though no one accused my dad of any crime, he was detained and held incommunicado for four months by the prosecutor! By means of hunger, fatigue and threat, the prosecutor just wanted my dad to testify against my shifu (master),” lamented Branda.

At the time, because of the prosecutor’s illegal investigation and smear campaign against Tai Ji Men, her family was discriminated against; her sister even received a threatening note at school. Her father and mother, Chief Financial Officer of a famous tech company and an editor at Taiwan’s Ministry of Justice, respectively, were forced to retire early. Their careers and reputations were ruined, and they suffered tremendous emotional and financial losses. Seven years ago, her dad passed away with regret, unable to see the redress of the Tai Ji Men case, lamented Brenda.

Ann Chen, a dual-licensed attorney in both Taiwan and California and co-author of the book Who Stole Their Youth, pointed out the importance of the book: “This book is officially released today at the IRF Summit, which is of great significance! We’ve also prepared hundreds of books to distribute to attendees of the Summit. Through today’s book launch, we hope the world will learn more about the Tai Ji Men case, pay more attention to human rights protection, the rule of law, and the importance of religious freedom for all spiritual movements!”

In addition to Who Stole Their Youth, another book, The Tai Ji Men Case in Taiwan: A Bitter Winter Anthology was released, which includes scholarly studies by non-members of Tai Ji Men as well as articles about the Tai Ji Men case published in Bitter Winter, a daily magazine dedicated to religious freedom. The two books insist on the global relevance of the Tai Ji Men case because taxation is the most convenient and common tool that the government of a democratic society can use to deny the religious freedom of minority groups.

During the Summit, representatives of the Action Alliance to Redress 1219 presented former U.S. Ambassador-at-large for International Religious Freedom Sam Brownback and Dr. Katrina Lantos Swett, President of the Lantos Foundation for Human Rights, two books each: Who Stole Their Youth and The Tai Ji Men Case in Taiwan: A Bitter Winter Anthology, and shared with them the 24-year Tai Ji Men case, a landmark case of human rights violations in Taiwan.

At the 47th session of the United Nations Human Rights Council in 2021, CAP-LC, an NGO with special consultative status at the ECOSOC (Economic and Social Council), filed a written report concerning the Tai Ji Men case and other incidents of tax law misuse targeting spiritual movements (CAP-LC 2021).

Gill Wang, another representative of Tai Ji Men, said that “Resolving the Tai Ji Men case, a landmark case of human rights violations, is the best way to help the Taiwanese government. Only then can it stand with its most important ally, the United States, to positively contribute to global stability and harmony. We sincerely hope that you can help Tai Ji Men rectify this 24-year-long case of injustice so our sacred land for self-cultivation can be returned to us and human rights and religious liberty will be protected in Taiwan!”

The event concluded with a positive note when the song “Love” was presented, conveying the organizer’s hope to bring together righteous people who care about human rights, love, and peace while urging all governments to implement human rights protection, in the hopes that no other individual or group around the globe will be denied their human rights or religious liberty, and the world will be filled with love and peace!

About Action Alliance to Redress 1219: Action Alliance to Redress 1219 is a group of international and Taiwanese legal, religious, and human rights specialists working to restore the truth about the ongoing persecution of Tai Ji Men in Taiwan by a small group of bureaucrats that has lasted for 24 years, as well as their misuse of authority and violations of the law. In addition to rectifying the Tai Ji Men case and revealing the truth, it is also committed to defending religious freedom and calling on those in power not to infringe on people’s human rights.

A photo accompanying this announcement is available at https://www.globenewswire.com/NewsRoom/AttachmentNg/0f6c7d7c-46d6-4a37-b947-9444c89876fa