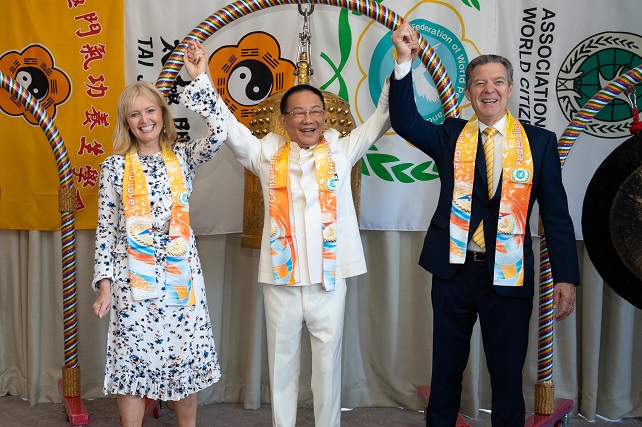 From left, Dr. Katrina Lantos Swett, president of the Lantos Foundation for Human Rights and Justice; Dr. Hong, Tao-Tze, zhang-men-ren (grandmaster) of Tai Ji Men and president of the Federation of World Peace and Love (FOWPAL); and former U.S. Ambassador-at-Large for International Religious Freedom Sam Brownback, right, hold hands to show solidarity for the promotion of love and peace in the world after Dr. Swett’s and Amb. Brownback’s ringing the Bell of World Peace and Love in Washington, D.C. on June 28, 2022.

WASHINGTON, D.C., June 28 (Korea Bizwire) — The Tai Ji Men Cultural Goodwill Group and the Federation of World Peace and Love (FOWPAL) have visited 101 countries to promote conscience, love, and peace. They revisited Washington, D.C. at a critical and turbulent time, and from June 28 to July 1, they will hold solemn and sacred ceremonies of ringing the Bell of World Peace and Love to pray for the world.

On June 28, Dr. Katrina Lantos Swett, president of the Lantos Foundation for Human Rights and Justice, and former U.S. Ambassador-at-Large for International Religious Freedom Sam Brownback, who are the co-chairs of the International Religious Freedom (IRF) Summit 2022, rang the Bell and made their wishes for peace. In today’s chaotic world where conflicts, human rights violations, and religious persecution happen frequently, the ringing of the peace bell in Washington, D.C., the epicenter of the world’s politics, is all the more extraordinary and meaningful.

Former U.S. Ambassador-at-Large for International Religious Freedom Sam Brownback rang the Bell and stated, “I pray for peace that surpasses understanding for everyone!” Ambassador Brownback once stated that freedom of religion is a fundamental human right, without which humanity cannot flourish, emphasizing, “We believe governments’ role is to protect that innate right of a person to select their own course of future for their soul.”

Dr. Katrina Lantos Swett, president of the Lantos Foundation for Human Rights and Justice, rang the Bell and stated, “I pray daily for peace but also for justice because without justice and freedom – especially freedom of religion and belief, there cannot be any peace.” She also expressed her gratitude to Tai Ji Men, saying, “I am grateful for the spirit of this wonderful community.”

Dr. Hong, Tao-Tze, president of FOWPAL, presented to each of the two leaders of conscience a certificate of appreciation for cultural exchange in recognition of their initiating the IRF Summits, promoting a culture of conscience, defending the freedom of religion and belief of every citizen of the world, and bringing stability to people’s hearts!

To date, 419 influential leaders from 128 nations, including 49 heads of state and government and seven Nobel Peace Prize laureates, have rung the Bell and contributed to global peace and sustainability! Three bell ringers, President Fradique de Menezes of Sao Tome and Principe (2001-2011), President Abdoulaye Wade of Senegal (2000-2012), and President Leonel Fernández of the Dominican Republic (1996-2000 and 2004-2012), for example, rang the Bell and made wishes for peace during their tenures and later mediated between neighboring countries to defuse potential wars, fulfilling their promises to help stabilize and sustain the Earth.

The Bell of World Peace and Love was recently rung at the 25th Eurasian Economic Summit in Turkey to promote global sustainability. Seven influential leaders rang the Bell, including five former heads of state.

The Bell was also rung by a total of 11 ministers of environment and environmental activists during Stockholm+50 in Sweden in early June. It was hoped that the ringers’ wishes for peace would be spread with the peaceful sound of the Bell, praying for the blessings of all living creatures, and that global citizens would safeguard the Earth and facilitate ecosystem restoration.

On July 1 at 10:00-11:30 am in Room 12-14 at the Renaissance Washington DC Downtown Hotel, Tai Ji Men and FOWPAL will host another ceremony of ringing the Bell of World Peace and Love as well as present cultural performances, where influential leaders will ring the Bell and pray for the world.

Ringing the Bell is especially significant at this tumultuous time because it aims to awaken the conscience of global citizens, to inject positive energy into the world to protect the Earth, and to foster world peace through the influence and participation of the bell ringers, who will bring more light and hope to the world with their words of conscience and reverence for Heaven and Earth. The collective peace efforts of more peace-loving individuals will make the world a better and safer place!

A photo accompanying this announcement is available at https://www.globenewswire.com/NewsRoom/AttachmentNg/7c7ccc8c-a9fa-4275-b6a4-f89720241fa9