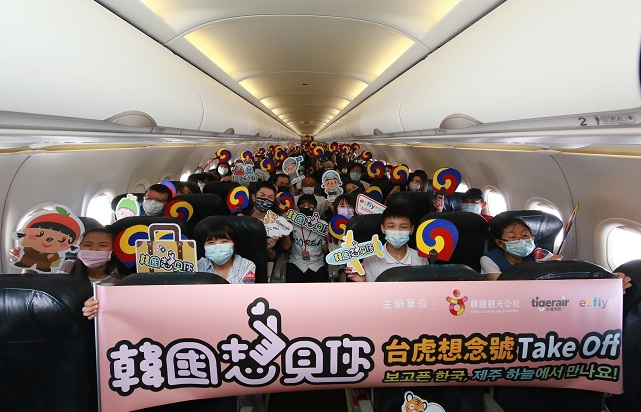 SEOUL, Sept. 22 (Korea Bizwire) — Under circumstances in which international trips remain halted due to the spread of the COVID-19 pandemic, an extraordinary flight event was held for a group of Taiwanese tourists.

The flight, which had 120 Taiwanese travelers on board, took off from the Taiwan Taoyuan International Airport and circled above the Jeju Island for about 20 minutes without landing, and then flew back to Taiwan.

The Taiwanese tourists enjoyed a variety of cultural experience programs, including the chance to try on hanbok, traditional Korean attire, and take photos in front of the airplane before boarding.

Fried chicken and beer, often featured in Korean drama series, were offered as the in-flight meal.

The KTO said that it prepared the special flight as a precursor to the resumption of tourism exchanges between South Korea and Taiwan.

This flight included a one-year voucher for round trip flight tickets that can be used after tourism between the two countries resumes, and the packages sold out just four minutes after being launched on Sept. 11.

According to a survey conducted by the KTO’s Taipei Office of 518 Taiwanese people, 82 percent said that they want to take overseas trips after the COVID-19 pandemic situation stabilizes.

In response to the question (multiple answers available) asking which foreign countries they wanted to visit, the largest share of the respondents (71 percent) picked South Korea as their top travel destination.