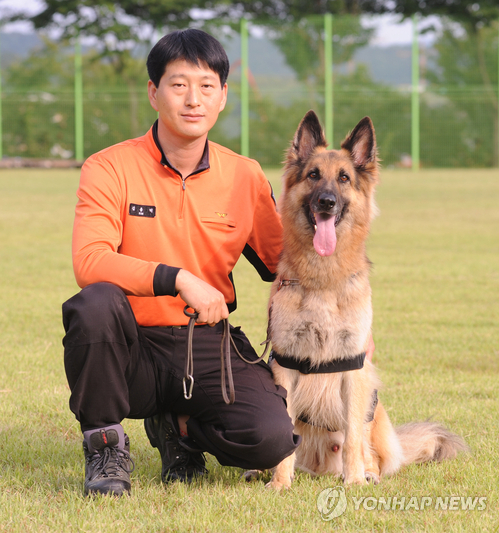 Handler and fire lieutenant Kim Yong-Duck of the Busan Special Rescue Service and his 8-year-old partner Sejoong have made 20 recoveries in the past 4 years. (image: Yonhap)

SEOUL, March 16 (Korea Bizwire) – A search dog and his handler are being recognized for excellent teamwork, which helped them find four survivors and recover three bodies last year. They were responsible for more than one quarter of the overall number of lost casualties found by the 22 search dogs and their handlers assigned to Korean fire services nationally.

Handler and fire lieutenant Kim Yong-Duck of the Busan Special Rescue Service and his 8-year-old partner Sejoong have made 20 recoveries in the past 4 years. Kim was recently honored at the 2014 Hero Firefighters Awards sponsored by S-OIL.

The search dog hero Sejoong, a German Shepherd, is a late bloomer. Search and rescue dogs in Korea are usually given assignments after two years of training. However, Sejoong failed to pass the final qualification test on his first few tries, and was only given a post five years after the start of his training.

It was Lieutenant Kim who recognized Sejoong’s potential. Kim said that Sejoong was one of the fastest and strongest dogs that he had ever seen when he first met the dog in 2010, prized attributes in Korea given the nation’s extremely mountainous terrain. Kim said that he immediately felt that he and Sejoong would be able to form a strong partnership.

The lieutenant also said that the keys to their success are sharing their feelings and consistent training, as they only have each other to rely on during cold nights searching for survivors. Kim can now even tell what the dog wants or how he feels with just one glance.

This dynamic duo won’t be around forever, though, as Sejoong is set to be adopted by another individual, since rescue missions are usually too physically demanding for dogs of old age.