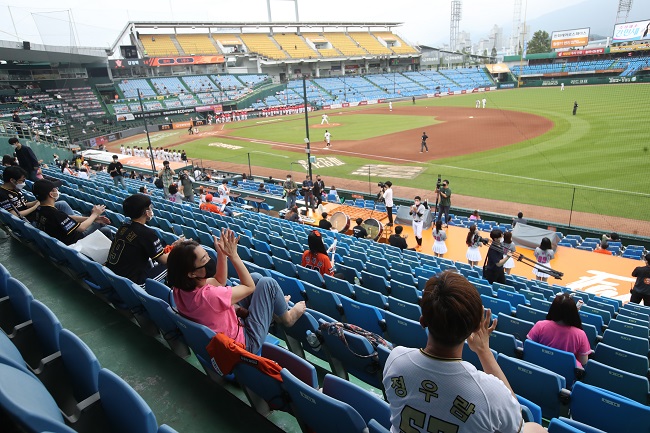 SEOUL, Aug. 19 (Korea Bizwire) — Virgil Hodges, a longtime fan of the Hanwha Eagles in the Korea Baseball Organization (KBO), missed watching baseball in person so much this spring that he would stop during his daily runs to see a recreational league game in his neighborhood in Daejeon.

He would stay for an inning and then finish his run.

By late July, he no longer had to halt his runs for amateur action, because gates to the professional game at Hanwha Life Eagles Park in his city, some 160 kilometers south of Seoul, were open again.

The KBO, much like other sports leagues around the world, has been affected by the coronavirus outbreak in 2020.

The start of the regular season was pushed back from March 28 to May 5, and when it did begin, fans weren’t allowed to attend, due to lingering infection concerns.

It wasn’t until July 26 that fans were back in the stands, albeit under the cap of 10 percent of stadium capacity. The figure was raised to 25 percent last week.

However, a recent surge in COVID-19 cases in and around Seoul put a damper on the growing excitement among KBO fan bases.

The government on Saturday placed Seoul and the surrounding Gyeonggi Province under stricter social distancing guidelines, and Busan followed suit on Sunday.

Stadiums in those areas closed again on Sunday, affecting five clubs — the Doosan Bears, the LG Twins and the Kiwoom Heroes in Seoul; the KT Wiz in Suwon, Gyeonggi Province; and the Lotte Giants in Busan.

As of Tuesday night, the Kia Tigers, based in Gwangju, 330 kilometers south of Seoul, were the only club not to close down their stadium.

When the gates reopened last month, the Eagles played a rare Monday game on July 27 to make up for a rained-out tilt against the Wyverns, and Hodges, a season ticket holder who typically attends over 70 games per season, was there, plus at three more home games that followed earlier this month. 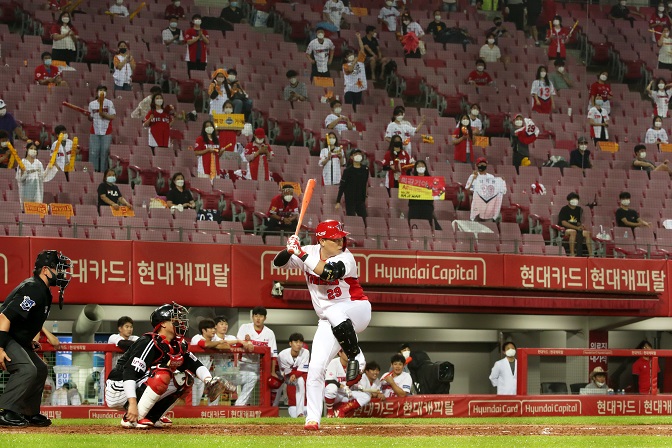 In this file photo from Aug. 6, 2020, fans watch a Korea Baseball Organization regular season game between the home team Kia Tigers and the LG Twins at Gwangju-Kia Champions Field in Gwangju, 330 kilometers south of Seoul. (Yonhap)

It has become a cliche to say the COVID-19 pandemic has brought on a new normal in sports. And that doesn’t just apply to athletes on the field of play.

Fans like Hodges had to adhere to a new set of health and safety protocols. Masks and temperature checks were mandatory.

Once inside the stadiums, they had be spread out, even when they’re traveling in a group. Eating and drinking from seats were both prohibited.

Loud chanting, singing and other cheering activities that may increase the risk of infections via droplets were also a no-go.

Those measures will remain in place when fans are allowed back into the stadium.

Hodges said the first game back “definitely felt strange” on multiple levels. Because the game was played in rainy conditions, there was even less than 10 percent of the capacity crowd at the park, leaving Hodges as the only person in his section.

“Hearing the shutters from the cameras, the talking from the SK dugout was strange, as you only hear those types of things when you are actually playing, not when you are a fan at the game,” Hodgers told Yonhap News Agency in a text message.

“Now that I’m back in the stands, I find myself missing the cheering more than the singing. It feels strange to sit in your seat and not yell when your team comes from behind, especially the rare times that it happens for Hanwha.”

Bryan Schelling, who has been going to KBO games for over a decade, could relate to similarly strange sensations after attending a game at Jamsil Baseball Stadium in Seoul to root for his favorite club, the Bears.

“It was a bit strange being spread out from even the group of people that you were at the game with,” he said.

“At Jamsil, there are two seats between fans and two empty rows in front of and behind each row that has fans in them. Because of this, there is definitely that lack of companionship that you would typically get in the cheering sections during regular seasons, i.e. sharing drinks, food, high-fives, etc.”

Schelling said he, too, misses the cheering because it is “essential to experience the real atmosphere of the KBO,” but he also understands why it’s being restricted now.

“To be honest, I’m just happy enough just being able to be back in the stands and watch live baseball,” he said.

“Over time, hopefully things get better with the COVID-19 situation and people can begin to congregate more than now. For the most part, it seems like people have been understanding of everything, myself included, so it doesn’t seem like anyone is overly disappointed with the rules in place.”

At least fans at Jamsil were allowed to stand up and cheer, however politely. Ditto for fans of the Kiwoom Heroes at Gocheok Sky Dome in Seoul. But Hodges said fans at Eagles Park were told by stadium ushers not to get up from their seats.

“It was odd because I saw it at other stadiums, but now we are being told no,” Hodges added.

Another KBO fan named Matt C., who declined to be identified by his full name, came away thinking more consistency leaguewide would be beneficial, after attending an Aug. 7 game between the visiting Lotte Giants and the Bears at Jamsil.

In a typical KBO game, home teams have their cheerleading squad on stage set up on the first base side, while fans of the road clubs are left to their own devices.

During this pandemic-hit season, cheerleaders have also doubled as stadium guides, constantly reminding fans to refrain from chanting and singing, and to simply clap and follow whatever moves cheerleaders were making on the stage. 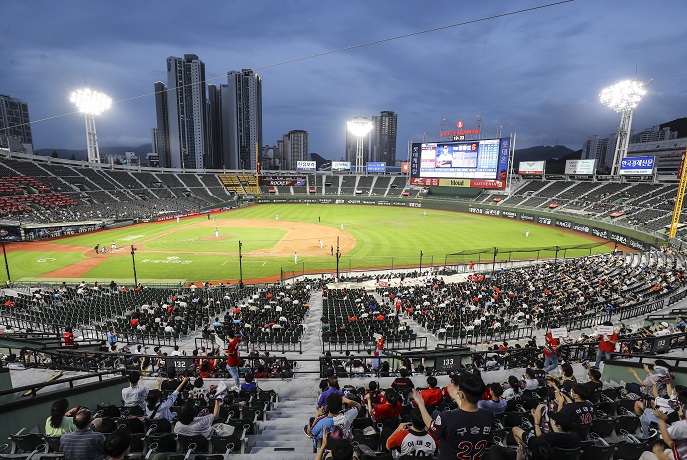 In this file photo from Aug. 12, 2020, fans watch a Korea Baseball Organization regular season game between the home team Lotte Giants and the NC Dinos at Sajik Stadium in Busan, 450 kilometers southeast of Seoul. (Yonhap)

On the visiting side, the crowd control proved more challenging in the game Matt attended on Aug. 7.

“The Lotte side cheered a lot when things of note in the game happened, with little or no moderation,” Matt said.

“The Doosan side seemed much more disciplined under the guidance of the cheermaster and cheerleaders, though they did have some spots of cheering for hits and runs scored.”

According to an official with the KBO, the health and safety manual doesn’t contain any specific guidelines on whether fans are allowed to stand up or not.

The official added that it’s up to individual clubs to make that call, as long as they’re able to ensure safe distancing among fans.

Ryan Bleck, who moved to South Korea earlier this year and attended his first KBO game at Jamsil on July 28, opined that the ban on cheering could be eased altogether.

“I found it a bit ironic and confusing that the cheerleaders were still leading cheers and songs, when fans are technically not allowed to cheer along, aside from clapping,” said Bleck, who went back to Jamsil for another game on Aug. 6.

Another area where some consistency may be in order is how foul balls are handled. The manual discourages fans from jostling one another to catch a foul ball, so that they won’t all be in close proximity, masks or not.

When Dylan Harris and his wife attended a Giants game at Sajik Stadium in Busan, 450 kilometers southeast of Seoul, on July 31, they saw “several people” have their foul balls taken away from them by stadium ushers.

Those balls were raffled off for random ticket holders later.

“It’s obviously to discourage people getting up and running around but it ruins the thrill completely,” Harris added.

Again, there’s no specific directive from the league office on what to do with foul balls. At both Jamsil and Gocheok Sky Dome, fans have been allowed to keep balls that they either catch or pick up.

It’s to be noted that all of this — putting in health protocols, following them and enforcing them — are new for everyone involved. For as long as the KBO has existed, fans have never been asked to be so quiet in their seats, and security guards have never had to tell people to please sit down.

If anything, you would stand out in certain sections by not standing up with everyone else.

Then there’s the eating and drinking part. Going to a KBO game, in a normal year, would be associated with keeping adult beverages flowing, accompanied by a wide range of culinary choices, be it the longtime ballpark staple of fried chicken, or assorted Korean-style street food and snacks, or more American dishes like pizza, hot dogs and hamburgers.

During that short window when fans could go to games, fans could still eat food — just not from seats, but in designated concession stands. 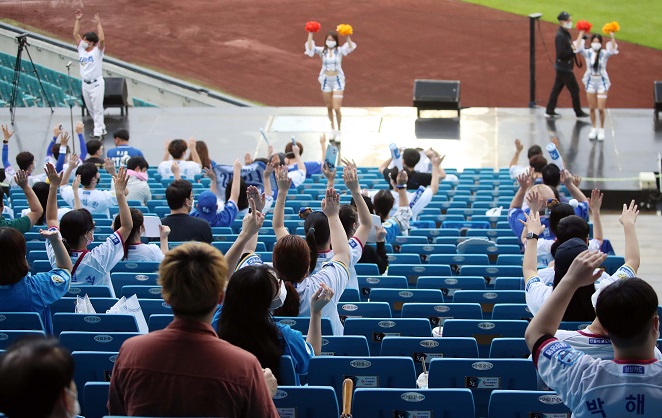 In this file photo from July 29, 2020, fans of the Samsung Lions follow their cheerleaders while rooting for the home team against the Hanwha Eagles during a Korea Baseball Organization regular season game at Daegu Samsung Lions Park in Daegu, 300 kilometers southeast of Seoul. (Yonhap)

Cecilia Kim, a Bears season ticket holder since 2013, said she appreciates the precautionary measures in place, but not being able to enjoy food while watching the action on the field at the same time was a head scratcher.

“I think it is stupid that they do not allow eating at the seats while we are already sitting apart. Also, all restaurants (outside baseball stadiums) are opened normally,” Kim said.

“(My) friends who used to come often do not want to come without the beer, food, loud noise. We miss that the most.”

Other fans have been resigned to the new reality that, if they want to watch baseball in person during the pandemic, they have to make some sacrifices.

“I just have to go out to the concourse to eat between innings and come back,” said Heroes fan Kim Jeong-min with a shrug during an Aug. 11 game between his team and the Eagles at Gocheok Sky Dome. “It’s not like we have any other choices now.”

A pair of friends at the dome, Park Soo-ho and Lee Tae-jin, said they’ve finally become adjusted to the new restrictions after attending a couple of games together.

“We try to follow the rules the best we can,” Park said. “We have to stop ourselves from high-fiving each other sometimes.”

Bleck, the new KBO fan, said it was easy for him to feel the passion of the fans, despite the absence of things that had been essential parts of KBO viewing experience.

“Everyone was clapping along and paying close attention to each pitch, which created a unique energy in the stadium. I could only imagine what it’s like with 25,000 fans singing, dancing and cheering on their favorite team and players,” he said.

“At times, I found myself watching the fans around me instead of the game itself. Even though I don’t speak any Korean, I was still able to enjoy myself and take in the sights and sounds while watching the game that I love. That’s the beautiful thing about baseball, it’s a universal language.”