“I urge both the ruling and opposition parties to find a middle ground on what kind of social welfare the country needs before coming up with ways to pay for such expenditures. There are considerable differences between political parties as well as ordinary citizens on what the level of welfare coverage should be.”

“Experience has taught us that raising taxes does not lead to more taxes being collected. The government is in the process of meeting pledges on welfare by cutting spending and digging up the underground market, whose actors have dodged paying their due. The ultimate plan is to reform the way withholding taxes are collected and to reduce complications involved in filing tax settlements in the future.” 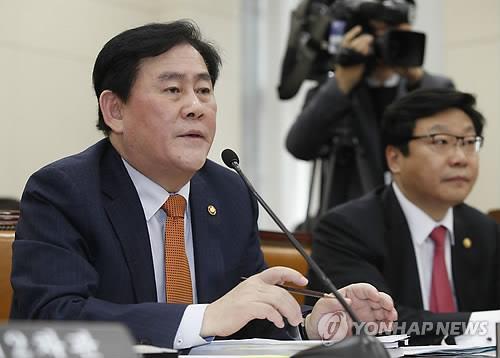 SEOUL, Feb. 4 (Korea Bizwire) — Raising taxes should be a last resort in increasing revenue and be considered only if there is public consensus, South Korea’s top economic policymaker said Wednesday, addressing the roiling debate on funding promised welfare programs.

Speaking to lawmakers on the Strategy and Finance Committee, Choi Kyung-hwan said the priority is still on expanding the country’s taxable base by finding people and companies that do not pay their due taxes.

Choi’s remarks come as lawmakers, including the new leadership of the ruling Saenuri Party, have publicly addressed the need to raise taxes if the country opts to provide more social welfare demands, most of which were campaign pledges by the Park Geun-hye administration.

Tax hikes being floated include marking up corporate taxes and those levied on the rich. The government has opposed such moves because they could adversely affect the business community and nip economic growth in the long run.

When pressed by legislators on whether it is possible to expand welfare without collecting more money, the official claimed he never personally mentioned “more welfare without raising taxes”. He, however, clarified that while critics view the cutting of various tax credits and tax reliefs as raising taxes, the government did not share this perception.

On the drop in corporate tax earnings last year, Choi said big companies such as Samsung Electronics and Hyundai Motor struggled at the time, which affected the amount collected.

He added that increasing corporate taxes must take into account developments in other countries.

“Japan, which is not doing well, has said it will lower rates for companies, while the U.S. said it will slash taxes levied on businesses,” he pointed out.

The official, who doubles as deputy prime minister, defended the latest revision to the income tax rules that raised public furor as people filed year-end tax returns. The new scheme heavily cut tax refunds by eliminating some of the tax break categories. The government said it was designed to have people pay fewer taxes throughout the year and receive a smaller refund at the end of the year.

Choi said a special task force will look into all the problems that have cropped up and make any needed changes, and that data on all 16 million people applying for tax settlements will be checked.

A complete assessment of different earnings brackets will be completed by March so that adjustments can be made, Choi said. He made clear that he opposed backdating of existing tax settlement rules, although elaborating that if lawmakers opted to change the law itself, the government will make certain that people who paid more taxes are reimbursed.