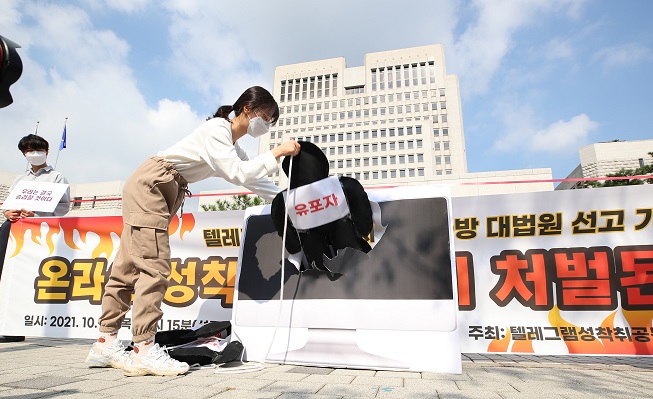 In this file photo, activists hold a protest in front of the Supreme Court in Seoul on Oct. 14, 2021, calling for the court to sentence heavy punishment against producers and distributors of sexually exploitative contents. (Yonhap)

The cyber crime division of the National Office of Investigation said 1,625 alleged offenders were rounded up during its special crackdown campaign period against offenses connected to sexually exploitative online material between March and October.

They included 919 producers and distributors, and 706 consumers of such illegal contents.

Police said that teenage providers of exploitative materials totaled 240, or represent 26.1 percent of the total, while those in their 20s and 30s who also supplied such contents accounted for 29 percent and 26.8 percent, respectively.

In terms of types of offenses, purchase and possession of exploitative contents accounted for 43.4 percent, followed by distribution and production, with 40 percent and 10.7 percent, respectively.