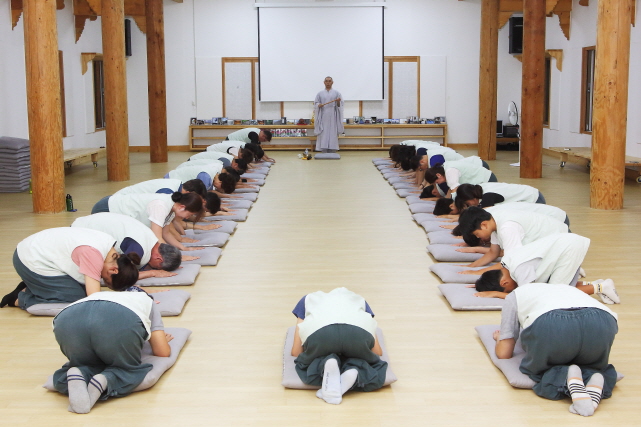 How meditation affects the mind has been a popular topic among scientists, but most of the research came from a Western point of view. (image: Inje County Office)

SEOUL, Aug. 27 (Korea Bizwire) — A recent study has revealed that temple stay programs that include traditional meditation and contemplation are in fact good for mental health.

Researchers from Seoul National University Hospital and the Cultural Corps of Korean Buddhism conducted four-day temple stays for 50 participants between 2013 and 2015.

After each of the stays, the research team conducted an MRI test on all of the participants, which revealed that their ability to concentrate and tolerate stress had improved.

The effect lasted more than three months, and the ability to process information as well as cognitive capabilities also improved.

A follow-up study found that the connectivity of white matter that links the frontal and parietal lobe as well as the left and right hemispheres had also been enhanced.

“In the age of stress and complexity, a temple stay is an effective way to take care of one’s mental health,” said Prof. Kwon Jun-soo, who headed the research team.

The study proves the effects of Korean traditional meditation, unlike previous literature that focused on Western practices.

How meditation affects the mind has been a popular topic among scientists, but most of the research came from a Western point of view.

“Temple stays come in various forms and styles that are more integrative and multi-dimensional than Western practices,” said Kwon.