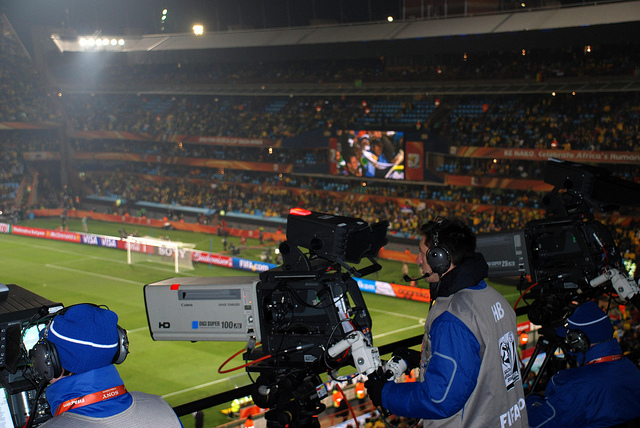 “Thanks to its channel strength at both PCs and mobile terminals, during the World Cup, Tencent is able to realize near-complete coverage of all the audiences that watch the game,” (image: Richard_of_England/ Flickr)

The differentiating factor between the 2014 World Cup and previous games is that Tencent, a world leader in mobile platforms, is focusing much of its coverage on content delivered to mobile devices. Throughout the games it will be streaming pictures, articles, video and other entertaining information via Tencent News, Tencent Video, WeChat, Mobile QQ, Weishi video-sharing app, Game Watching App, and Tencent Microblogs (Weibo)  to users on mobile terminals.

The day before the kick-off, on June 12th, Tencent launched original video programs, including Brazil, Facing Superstars, The Star Wife, Crazy World Cup, Biased Fans Show, and Super Match Day, offering coverage of the upcoming games from many different perspectives. When the opening match was officially kicked off at 4am Beijing time on the 13th, the Tencent World Channel launched near-real-time coverage of the game to its users’ mobile terminals and PCs, including on-the-spot commentary on the Tencent Game Watching radio program, broadcast in ten Chinese dialects. Coverage also included real-time updates on Tencent Microblog (Weibo) and its popular messaging communication service WeChat.

At the main venue in Rio de Janeiro Tencent journalists captured unique video footage of Larissa Riquelme, the renowned Paraguayan model and actress. After placing it online, the video attracted more than 100,000 views in only five hours.

According to the Media Research Lab of China’s Tsinghua University, during the opening ceremony and the opening match, 34.4 percent of users accessed event coverage on the Tencent News platform, far more than on competing Chinese portals, and 33.4 percent of the Netizens said they were satisfied with the push speed of Tencent News. On the night of the opening of the World Cup, survey data showed that 49.2 percent of users chose to watch the event on Tencent Video, far more than on competing video platforms. Tencent Video was also significantly ahead of other portals on PC terminals with a viewing rate of 48.6 percent to secure the No.1 position.

Tencent’s unmatched coverage of the World Cup has also attracted many of China’s leading advertisers. As the games began on June 13th, Tencent World Cup coverage had attracted 55 advertisers including Wong Lo Kat, IBM, China Merchants Bank, and Nike, with total revenue exceeding that of the London Olympics in 2012. Of the 55 advertisers, 39 chose to place their ads on mobile terminals.  Nike has invested heavily in the 8 video screens on Tencent mobile channels, and China Unicom, the designated telecom sponsor of the World Cup, partnered with Tencent on Wow 4G On the Spot program.

“Thanks to its channel strength at both PCs and mobile terminals, during the World Cup, Tencent is able to realize near-complete coverage of all the audiences that watch the game,” said Yongzhi Wang, deputy editor-in-chief of Tencent’s QQ.com.  “There is no doubt that ‘mobile’ is the key word for this event as Tencent pushes information to its users via its four mobile channels, Tencent News, Tencent Video, WeChat and Mobile QQ. Tencent is gathering all of its mobile resources to make this the most exciting, most interactive World Cup ever.”