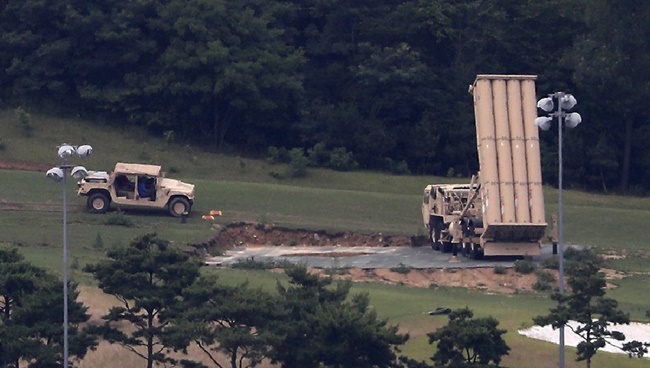 Facing the north at a 70-degree angle on a temporary platform, the THADD launchers stood high with a couple of U.S. soldiers patrolling around them, leaving onlookers with no little to no trace of the former golf course. (Image: Yonhap)

Though pictures taken far afield of Terminal High Altitude Area Defense (THAAD) system launchers have been covered by the media in the past, it’s the first time the THAAD radar was openly shown to a wider number of officials since late April, when the politically-charged equipment was first brought into the new U.S. Forces Korea (USFK) base, once a golf course owned by South Korean conglomerate Lotte Group.

Facing the north at a 70-degree angle on a temporary platform, the THADD launchers stood high with a couple of U.S. soldiers patrolling around them, leaving onlookers with no little to no trace of the former golf course.

During the same day, the Ministry of National Defense conducted four surveys of electromagnetic radiation at different distances, following environmental concerns that swept through local neighborhoods.

During a six-minute test, the radiation level at a spot 100 meters from the radar was measured at 0.01659 watts per square meter on average. 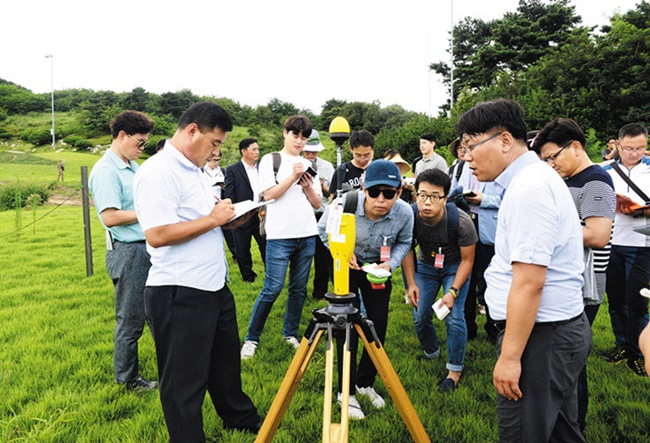 During a six-minute test, the radiation level at a spot 100 meters from the radar was measured at 0.01659 watts per square meter on average. (Image: Yonhap)

Similar results were found during noise tests, as the noise level of the anti-missile system was found to be on par with the maximum regulatory standard of 50 decibels in residential areas.

“It’s similar to the level of noise during conversation. After the environmental survey comes to an end and the temporary generator currently in operation is replaced with regular electric power supply, there will be little to no noise,” an official at the defense ministry said, after conducting the joint environmental survey with the Ministry of Environment.

There were, however, some blunders during the testing.

Despite plans to inspect oil storage facilities and the wastewater treatment process on base, members of the evaluation committee including officials from the Daegu Regional Environmental Office and Korea Environment Institute weren’t able to go as planned due to miscommunication with the Ministry of National Defense.

“Another inspection will be scheduled for the areas that were missed including the wastewater treatment facility after communicating with the defense ministry,” an official at the Ministry of Environment said.

In the meantime, protesters are continuing to express their opposition to the U.S. anti-missile system, having thwarted a government environmental impact survey of a similar nature in Gimcheon, another city under the influence of the THAAD system’s powerful X-band radar.

The Ministry of National Defense had already stated that it was regretful that local residents decided not to attend the site inspection in a statement released to the press last Wednesday.

Among measures considered to ease the tension from opposition, an apology from a high-ranking U.S. military official to local residents over the rude behavior shown by a U.S. soldier while the equipment was being moved back in April is being considered, according to the defense ministry.

Despite opposition, however, support from three major opposition parties following the positive result from the environmental risk assessment is expected to embolden the government to go forward with plans to deploy four more THAAD launchers with confidence.