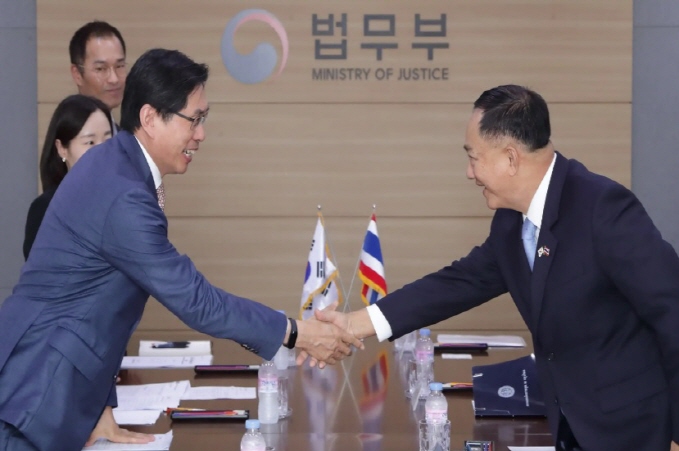 Thai Minister of Labour Adul Sangsingkeo (R) revealed plans to hold a meeting with his Korean counterpart in efforts to resolve the issue stemming from the influx of Thais currently working in South Korea illegally. (image: Yonhap)

Thai Minister of Labour Adul Sangsingkeo revealed plans to hold a meeting with his Korean counterpart in efforts to resolve the issue stemming from the influx of Thais currently working in South Korea illegally.

The Thai minister’s request, then, is to ensure that the 120,000 Thai aliens in Korea are not forced to return to Thailand all at once.

Adul pointed out that the South Korean government’s yearly quota for Thai workers was limited to 5,000 individuals, which has contributed to the increase in illegal immigrants.

“The current measure disallows people over 39 years old to work in Korea, but the Thais who are seeking work are mostly over the age limit,” said the Minister.

After the meeting, the South Korean government designated March to June of next year as a special period to allow illegal immigrants to voluntarily leave the country.

Those who leave during this period will not be penalized, but those who are caught during a possible crackdown will be unable to enter the country for 10 years.

Because working in South Korea can pay three to four times more than working in their own country, some Thai nationals have been working illegally by taking advantage of the visa-free agreement that people of both nations are granted for 90 days.