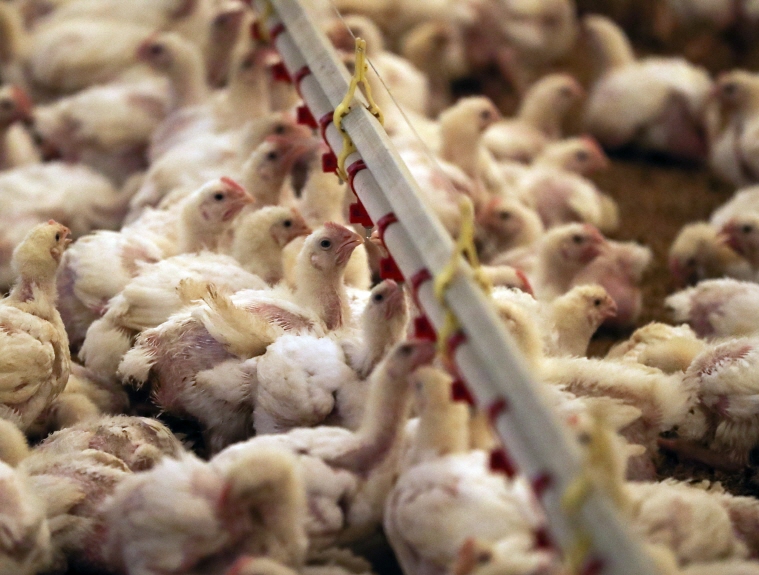 EUMSEONG, Jul. 19 (Korea Bizwire) — When a heat wave warning was issued for all of North Chungcheong Province on Tuesday afternoon, poultry farm owners in the region were naturally on high alert.

At one poultry farm measuring 800 square meters in size situated in Maengdong-myeon in the province’s Eunseong-gun, over 17,000 chickens were seen suffering as the mercury rose.

Many chickens had collapsed, having succumbed to the heat.

The temperature circa 1:35 p.m. on Tuesday was 31.7 degrees Celsius. Seven gigantic fans were in operation, but were not enough to help cool the chickens down.

By 2 p.m., the thermometer shot up to 35 degrees. Ban, the 43-year-old owner of the poultry farm, said that the summer heat was “just as dangerous as bird flu” for the chickens.

Not paying proper attention to the chickens, even for just a moment, could result in thousands of chickens perishing instantly in the heat, said Ban.

Following the deaths of the chickens, Ban installed thermal insulation materials in all of the barns, which now helps protect the chickens from the strong summer sun.

But other poultry farms that are not equipped with heat resistant insulation try to keep cool by continuously spraying cold water on rooftops via water hoses.

In addition, farm workers monitor the internal temperature by the hour before checking large ventilation fans installed at the poultry farms to see if they are working properly.

If temperatures within the pens surpass 36 degrees Celsius, moisture mist sprays must be turned on to ensure that the chickens do not dehydrate.

Ban’s farm consumes around 40,700 liters of water every day in the summer months.

According to the Ministry of Agriculture, Food and Rural Affairs, 753,191 chickens had perished from the sweltering summer heat as of July 17.

One thought on “Thousands of Chickens Perished Instantly: One Poultry Farm’s Fight Against Scorching Heat”