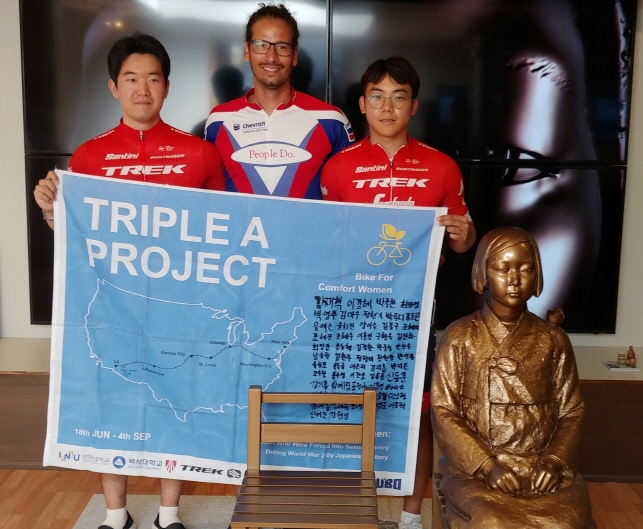 College students Baek Hyeon-jae and Lee Ho-jun set off from the beach in Santa Monica, L.A., on June 23, as part of the fourth iteration of Project 3A.

Project 3A, short for Admit, Apology and Accompany, is a campaign aiming to bring people together to urge Japan to admit and apologize for forcing women into sexual slavery during World War II.

Every summer since its kickoff in 2015, young people have participated in the trans-American campaign.

Before touching down in New York on Aug. 31, Baek and Lee passed through Arizona, New Mexico, Oklahoma, Kansas, Missouri, Illinois, Pennsylvania and Washington D.C., zig-zagging across the country rather than heading straight across in order to maximize publicity.

Marking the culmination of their odyssey were protests held at Times Square in New York and in Washington D.C.

“There were moments when we just wanted to give up, but we couldn’t because the trip was to deliver the voices of the surviving victims,” the young cyclists said at the press conference on September 4.

“Many Americans we met did not know about comfort women, but soon expressed their empathy when they learned about it.”

An unexpected guest joined the quest this time. Antonio Navarro, a Spanish teacher at a high school in Chicago, learned about the project on the internet and decided to join in.

“Just like many Americans, I did not know about it at all,” said Navarro. “This project allowed me to take part in remembering the historical pain.”

“Navarro’s participation meant a lot to us. He also drafted the speech for our rallies in Washington and Philadelphia,” added Lee.

The campaign is expected to increase in scale next year by inviting local biking communities across the country to participate.

Five victims of sex slavery passed away this year, and there are now only 27 remaining survivors in South Korea.