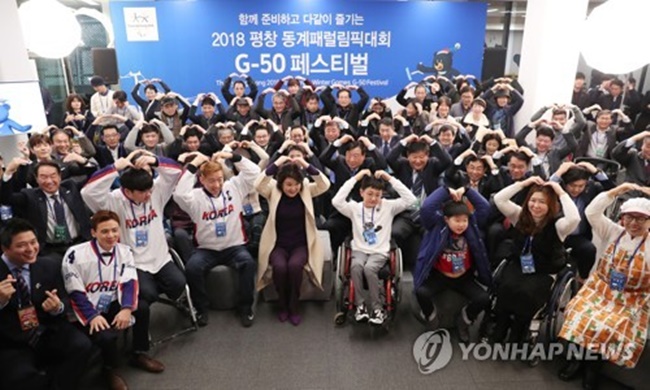 South Korean first lady Kim Jung-sook (5th from R) poses for a photo with athletes and officials at a 50-day countdown event for the PyeongChang Winter Paralympics at Dongdaemun Design Plaza in Seoul on Jan. 18, 2018. (Image: Yonhap)

There are less than 50 days left until the opening of the first Winter Paralympic Games in South Korea. And as of Thursday, 155,000 tickets had been sold, or 70.4 percent of the organizers’ target of 220,000 tickets. The Winter Paralympics will be staged from March 9 to 18 in PyeongChang, 180 kilometers east of Seoul, and other sub-host cities nearby.

Among Paralympic sports, the organizers said para alpine skiing has been the most popular so far, with 93 percent of available tickets, or 13,376 tickets sold, followed by para snowboarding with 92.3 percent. The opening ceremony and the closing ceremony have seen 42.9 percent and 19 percent of their tickets sold so far, respectively.