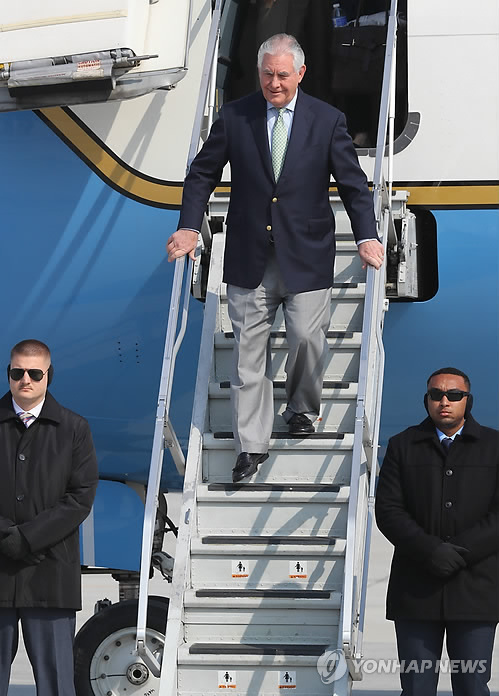 Tillerson’s visit to Korea is part of his three-country Asian tour that will also take him to China this weekend. (image: Yonhap)

SEOUL, March 17 (Korea Bizwire) – U.S. Secretary of State Rex Tillerson began his two-day trip to South Korea on Friday, which is expected to focus on discussing ways to strengthen the bilateral alliance and fend off the growing threats from North Korea.

Tillerson arrived at Osan Air Base in Pyeongtaek, 70 kilometers south of Seoul at about 10:10 a.m. He came from Japan where he held talks with Prime Minister Shinzo Abe and others in Tokyo on Thursday.

Right after landing at the airport, Tillerson headed to the Demilitarized Zone on the inter-Korean border, the first major schedule of his visit to the ally.

Later in the day, he will meet Acting President and Prime Minister Hwang Kyo-ahn, who took over in December after then-President Park Geun-hyt with Acting Pre was impeached by parliament.

He also plans to hold a meeting with South Korean Foreign Minister Yun Byung-se to discuss pending regional and global issues. The two will hold a joint press conference before going into the talks.

Tillerson’s visit to Korea is part of his three-country Asian tour that will also take him to China this weekend. This marked his first trip of this kind since taking office as top diplomat under the Donald Trump administration.

Tillerson came amid mounting anxiety over additional provocations by the North and deepening friction between South Korea and China over the deployment of a U.S. missile defense system called the Terminal High Altitude Area Defense (THAAD).

In particular, the message that the former Exxon Mobil executive will deliver will be closely scrutinized for any hints at how the U.S. government will deal with the North given that Washington is in the final stages of its policy review on Pyongyang.

During a press conference held after meeting Japanese Foreign Minister Fumio Kishida in Tokyo on Friday, Tillerson told reporters that U.S. efforts over the past 20 years to denuclearize the North have failed, calling for a “new approach” in dealing with Pyongyang.

The secretary didn’t provide details on what the new approach would be but noted that he exchanged views on it with Japan and will do so with his counterparts in South Korea and China. He is to fly to China on Saturday.