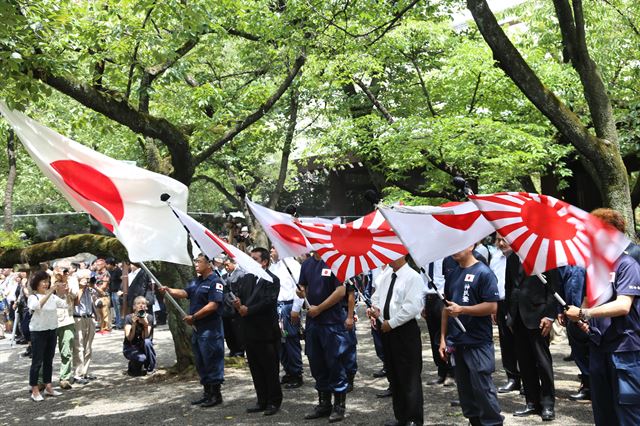 Many South Koreans see the Rising Sun Flag as a symbol of Japan’s aggression and militarism. (Yonhap)

SEOUL, Sept. 4 (Korea Bizwire) — Japan has announced its plans to permit the use of the Rising Sun Flag at the 2020 Tokyo Olympic and Paralympic Games.

Many South Koreans see the Rising Sun Flag as a symbol of Japan’s aggression and militarism.

According to SBS, a domestic broadcaster, the Tokyo Organizing Committee of the Olympic and Paralympic Games announced on Tuesday its decision to allow the flag at Olympic Stadiums, rejecting the proposal submitted by the Korean Sport & Olympic Committee to ban possession of the flag in the stadiums.

“At the Olympics, we have to show the world that the Rising Sun Flag is no different from the Nazi’s Hakenkreuz,” said Prof. Seo Kyung-duk of Sungshin Women’s University.

The Hakenkreuz and the Rising Sun Flag were used by Nazi Germany and the Japanese Empire, respectively, during World War II.

Germany banned the use of the Hakenkreuz following the war, but Japan continues to use the Rising Sun Flag to this day.

“It isn’t something we should be angry about. The Tokyo Olympics can be used as a great opportunity for us,” said Seo.

The Culture, Sports, and Tourism Committee at the National Assembly opened a plenary session on August 29, passing a resolution to ban the use of the Rising Sun Flag at stadiums during the 2020 Tokyo Summer Olympics.

“Exploiting a sports event as a tool to send out political messages is incoherent with sports ethics,” said a source from the Ministry of Foreign Affairs.

Despite a series of proposal from South Korea to limit the use of the Rising Sun Flag, Japan has been insistent on allowing it, bringing the two countries to collide on yet another historical controversy.

The Tokyo Organizing Committee continues to mark South Korea’s easternmost islets of Dokdo as Japanese territory on its official website despite a series of complaints from the South Korean government.