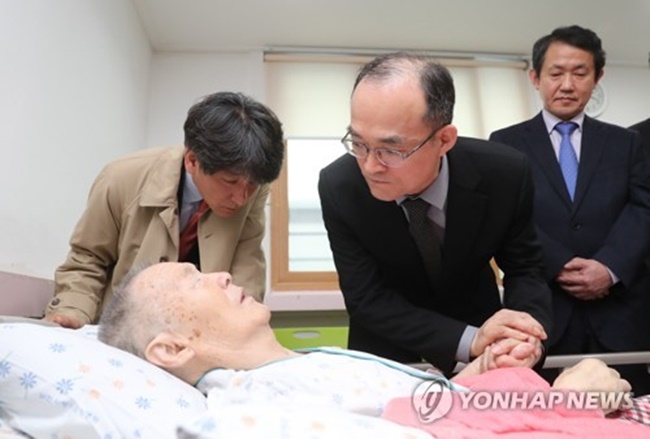 Prosecutor-General Moon Moo-il (2nd from R) holds the hand of Park Jong-ki, father of late Seoul National University student Park Jong-chul, who died of severe torture by police in January 1987. Moon visited Park in a nursing home in the southern port city of Busan on March 20, 2018, to offer a formal apology over his son’s death. (Image: Yonhap)

BUSAN/SEOUL, March 20 (Korea Bizwire) – South Korea’s chief prosecutor on Tuesday apologized to the father of a student who was killed by police torture in 1987, sparking the landmark June 10 popular uprising against the authoritarian Chun Doo-hwan government.

“I apologize for (the state) inflicting so much pain. Sorry that we came to apologize too late,” Moon was quoted by the Supreme Prosecutors’ Office as saying to Park.

“We will not make the same mistakes of the past again. We will work to fulfill our duties of these times,” he added.

“It happened anyway,” replied Park, who is being treated following spine surgery earlier this year.

His son died aged 21 in January 1987. Police initially announced he died of a heart attack but it later turned out that he was drowned during water torture.

Park’s death and the police cover-up sparked massive protests against the general-turned-president, who seized power after a coup in 1979. Chun bowed to pressure to accept the public’s demand for the restoration of a direct presidential election.

The prosecutor-general’s apology comes as the liberal Moon Jae-in administration moves to rectify the past governments’ misdeeds and abuses.

Last month, an independent committee commissioned by the Ministry of Justice requested the reinvestigation of 12 suspicious cases, including Park’s death.