“Playing in the majors has been my dream since childhood. I’ve watched Jung-ho prepare to reach the big leagues for the past year. It’s an experience money can’t buy and I’d like to go through the same thing.”

“We (as Nexen players) have come up empty in the past two postseasons, and I’d love to return to the Korean Series and bury those bitter feelings. Personally, I won’t just try to hit 53 home runs. I want to address some shortcomings and establish my own batting style.” 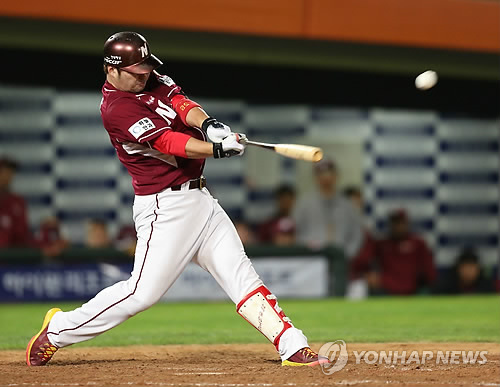 Park, who has launched 120 home runs in the past three seasons for the Nexen Heroes in the Korea Baseball Organization (KBO), is eligible to be posted after the 2015 season with the Heroes’ blessing. His former Nexen teammate, shortstop Kang Jung-ho, signed with the Pittsburgh Pirates last week after getting posted, and Park, a year older than Kang at 28, said he’d like to follow in Kang’s footsteps.

“Playing in the majors has been my dream since childhood,” Park said after the third day of the Heroes’ spring training wrapped up here in Arizona. “I’ve watched Jung-ho prepare to reach the big leagues for the past year. It’s an experience money can’t buy and I’d like to go through the same thing.”

Park said he’d rather not get further into talks about his future outside the KBO, since he is in Arizona to get ready for the new season. He hinted that he’d like to have more serious discussions with team officials once they return to South Korea.

Park toiled on the Twins’ bench in 2005 and 2006, and then spent two years in the military before returning to the same reserve role in 2009 and in 2010. He hit below the Mendoza Line in three of his first four KBO seasons.

After joining the Heroes, Park hit his then-career high 13 home runs in 2011, 11 of which came in 18 games in September.

Park blossomed in 2012, his first full season, by hitting 31 home runs and driving in 105 RBIs to win his first MVP honors. He was even better the following year, with 37 homers and 117 RBIs, and raised his batting average from .290 to .318 en route to his second straight MVP award. He also cut down on his strikeouts, and improved his walk total, on-base percentage and slugging percentage.

In 2014, Park belted 52 home runs, becoming only the third KBO player, and the first in 11 years, to get past the half-century mark, while setting a new career-high with 124 RBIs.

Thanks in large part to Park’s prowess at the plate, the Heroes have made the playoffs in each of the past two seasons. They were eliminated in the first round in 2013 and lost in the championship Korean Series last year to the Samsung Lions. 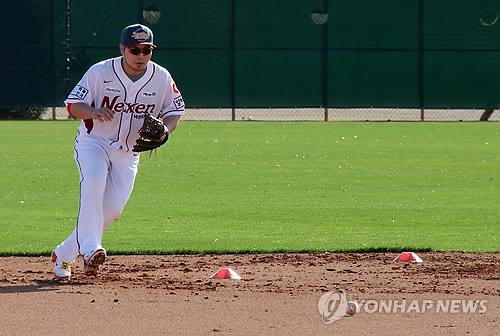 Park Byung-ho, first baseman of the Nexen Heroes, fields a grounder during the team’s spring training in Surprise, Arizona, on Jan. 19, 2015. (Yonhap)

Park said his goal for the new season isn’t to hit more home runs but to win the championship.

“We’ve come up empty in the past two postseasons, and I’d love to return to the Korean Series and bury those bitter feelings,” Park said. “Personally, I won’t just try to hit 53 home runs. I want to address some shortcomings and establish my own batting style.”

As for Kang, Park predicted his ex-teammate will do just fine.

“He has tremendous focus and work ethic,” Park added. “I think he will be successful in the big leagues, too.”

The Heroes’ manager, Yeom Kyung-yup, offered this bit of comparison on the two players.

“Whereas Kang has developed his power through weight training, Park has been gifted with natural strength,” Yeom observed. “Kang is a type of player who quickly forgets about a bad day and looks forward to the next day. Park is someone who constantly goes over things in his mind. He has come a long way to become the country’s premier slugger and I think he has the wisdom to find his way out of the worst of slumps.”