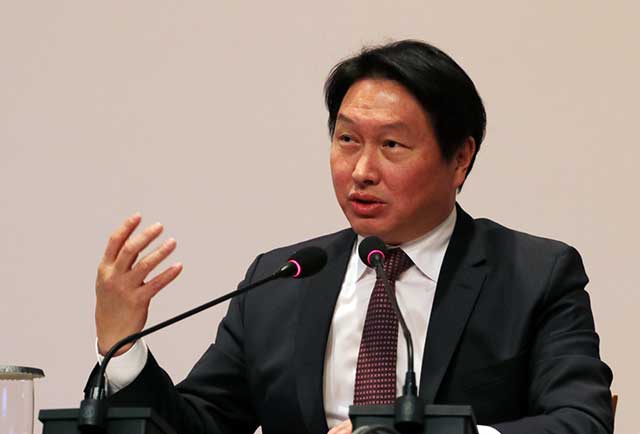 NEW YORK, Sept. 28 (Korea Bizwire) — The chief of South Korean conglomerate SK Group said Thursday its chipmaking unit’s participation in a deal to acquire Toshiba Corp.’s memory business still has many hurdles to clear, adding he will keep the company on its toes until the deal is finalized.

Japanese tech giant Toshiba signed a deal Thursday to sell its memory business to a global consortium which includes participants from South Korea, the United States, and Japan.

The consortium also includes U.S.-based Bain Capital, Apple Inc. and a handful of other tech players.

The South Korean chipmaker is set to invest 4 trillion won (US$ 3.5 billion) in the acquisition plan.

Of that amount, 1.3 trillion won will be invested to buy Toshiba’s convertible bonds, with the remaining 2.7 trillion won being allocated to a fund established by Bain Capital as a limited partner.

“The (deal) is not yet completed and (we) still need to go through more procedures,” SK Group chairman Chey Tae-won told reporters during his business trip here. Chey visited the United States to take part in the 60th anniversary of the Korea Society, an organization which promotes Seoul-Washington ties.

“In order for the contract to be completed, there must be approval from governments. There are also legal disputes which need to be settled,” Chey said, apparently referring to an arbitration suit filed by U.S. company Western Digital Corp.

Western Digital, which has had close ties with Toshiba since 2000, filed a request for arbitration with an international court. The U.S. chipmaker claims the decision to clinch an agreement with the global consortium is a violation of its prior agreements with Toshiba.

The deal also calls for approval from related authorities in Japan and the United States. The deadline for the agreement is March 2018.

Toshiba said SK hynix will be “firewalled” from accessing proprietary information and will not be permitted to own more than 15 percent of the voting rights for a period of 10 years.

Chey said he regards the Toshiba deal as an investment rather than just an acquisition.

“I am thinking in detail about ways to bring an environment of coexistence to the chip industry. In that respect, we have earned the opportunity to cooperate with Toshiba,” Chey said.