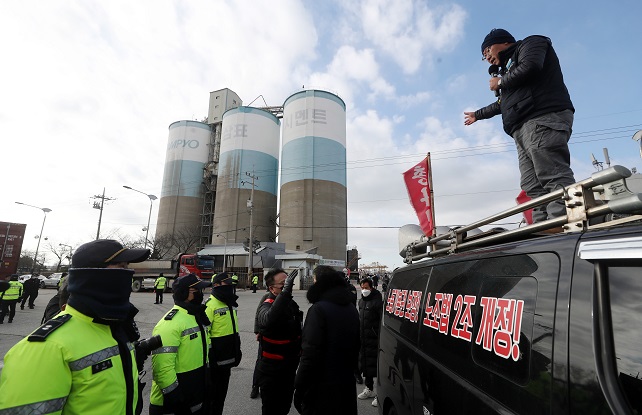 Police confront a striking union member of the Cargo Truckers Solidarity Union at the operation site of Sampyo Cement Co. in Incheon, 27 kilometers west of Seoul, on Dec. 1, 2022. (Yonhap)

SEOUL, Dec. 2 (Korea Bizwire) — A major South Korean trade association said Friday it is considering filing a compensation suit against striking truckers over the mounting losses and damage the walkout has caused in the cement and steel industries.

The Korea International Trade Association (KITA) said it is “actively looking into” the option, as the strike, now into its ninth day, has incurred more than 1 trillion won (US$768 million) in damage as the unionized truckers continue to refuse to return to work.

The truckers went on strike on Nov. 24, demanding the government make a minimum wage scheme permanent. The strike has disrupted shipments of cement and steel supplies across the country.

The government has issued an executive order on cement truck drivers to resume work or face penalties, warning it could take the same measure against truckers in the fuel and steel industries.

Damage from the strike has so far amounted to 18 billion won a day for the cement sector, with the daily shipments at around 10 percent compared with the average, KITA said.

Steel companies, including top steelmaker POSCO, have suffered around 1.1 trillion won worth of damage so far, according to the Ministry of Trade, Industry and Energy.

As of 8 a.m. Friday, 55 gas stations nationwide had run out of fuel. The figure is larger than the previous day’s 33 stations facing fuel shortages, the ministry said.

The petrochemical industry’s per-day shipments have fallen to 30 percent of the average, which has incurred about 68 billion won in damage every single day.

The ministry said the walkout has cost 442.6 billion won in unmet deliveries and production disruptions for the refining industry, and 319.2 billion won for the auto sector.

In a government response meeting earlier, Interior Minister Lee Sang-min reiterated that the government intends to expand the return-to-work order to other industries if the strike prolongs.

Since the execution order was issued, the cement shipments have recovered to about 46 percent of the daily average, according to the Ministry of Trade, Industry and Energy.