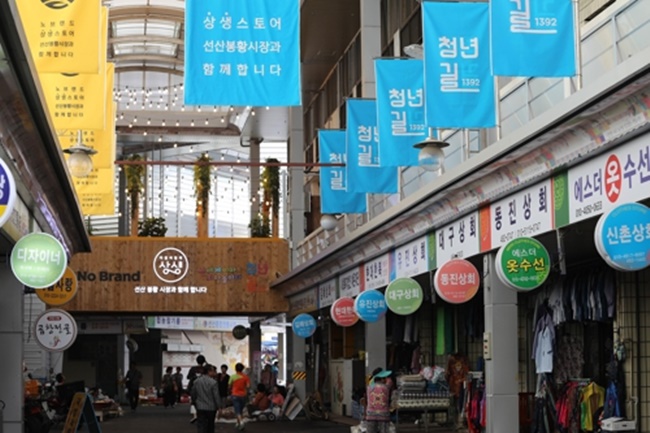 SEOUL, Jun. 29 (Korea Bizwire) – On June 27, two stores symbolizing harmony between big and small businesses opened at Seonsan Bonghwang Market in Gumi, with the grand openings of “No Brand Store” and “Youth Way”. The market has served as the principal traditional market in Gumi from the Chosun dynasty, but for the past 24 years, numerous vendor stalls have remained vacant as visitor numbers tumbled.

Of these vacant spaces, the second floor of the complex A has been transformed into an E-Mart “No Brand” store that sells quality products at lower prices than its branded competitors, as well as a start-up mall run by young entrepreneurs.

This “No Brand” store has more than 1,200 products on offer, including cookies and cheesecake, as well as other typical household goods. The product selection is significantly different from that at traditional stores below, where vendors hawk traditional Korean staples such as cassia, hovenia, crown daisy and millet.

At the grand opening, neighborhood residents stopped by to enjoy the new shopping experiences, while taking photos at the entrance of the market.

In most cases, there are conflicts of interest between superstore chains and small independent stores in South Korea. Despite this opposition, Gumi’s No Brand store, which is operated by retail giant E-Mart, was opened at the request of the market’s existing vendors.

Kim Soo-yeon, who runs a shop at the market, devoted all her energy to convincing other store owners in the market to embrace the new partnership. “I was concerned when the market was empty even during popular shopping periods. Then I was told about this ‘No Brand’ store. I hope that the market can be revitalized with more visits from young people”, she said.

E-Mart agreed to limit products sold at its No Brand store to processed food and household items.

Another new initiative at the market is a mall run by young entrepreneurs, called “Youth Way”. A total of 17 young entrepreneurs took advantage of government subsidies to establish a variety of small businesses, including a nail art studio, flower shop, and photography cafe.

The government has offered free space to “Youth Way” mall tenants this year, and while business owners will have to pay rent when the year is up, the costs are only expected to be 25,000 won to 45,000 won per month afterward. Organizers expect an additional five stores to open shortly, for a total of 22.