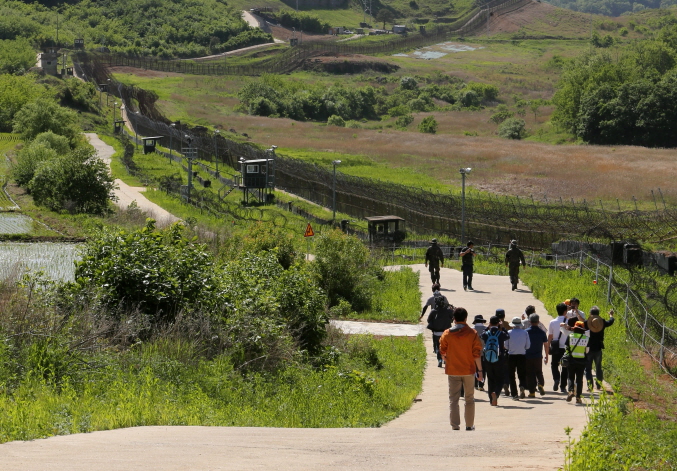 Journalists walking along the DMZ Peace Trail in Cheorwon of Gangwon Province on May 29, 2019, ahead of its formal opening in June. (Yonhap)

SEOUL, Jun. 4 (Korea Bizwire) — The government said Tuesday it will create a coast-to-coast hiking trail along the Demilitarized Zone (DMZ) that separates South and North Korea by 2022.

The newly envisioned route, tentatively named East-West Crossing Route of DMZ Peace Trail, will be 501 kilometers in length and pass through 10 local autonomous districts from Ganghwa on the west coast to Goseong on the east coast, according to the Ministry of the Interior and Safety.

Under the trans-peninsula trail project, hiking routes in the 10 border districts, including DMZ Peace Trails in Goseong and Cheorwon, both in Gangwon Province, and Paju of Gyeonggi Province, will be connected at a cost of 28.6 billion won (US$24.2 million) over the next four years, the ministry explained.

The DMZ, which is about 250 km long and 4 km wide, is one of the world’s most heavily fortified borders, with the rival Koreas technically in a state of war as the 1950-53 Korean War ended in a truce, not a peace treaty. Since the signing of the comprehensive military agreement in September last year, the two Koreas have pushed for several tension-reducing measures.

The first DMZ Peace Trail was launched in Goseong on April 27 and the second trail in Cheorwon on June 1, with the third one set to open in Paju later this year.

Hikers are allowed to walk inside the DMZ under the DMZ Peace Trail program, while the new trans-peninsula route will be designed for hiking along the DMZ from east coast to west coast.

The government will finalize the detailed coast-to-coast route after consulting with residents, experts and local officials.

It will also establish 10 base centers, mostly on sites of closed schools, along the hiking route to provide accommodation and food services for hikers.

Meanwhile, the competition ratio to hike on the DMZ Peace Trail in Cheorwon averaged 18 applicants for each available spot in the first 10 days of June, the ministry said. The Cheorwon trail is run twice a day, except Tuesdays and Thursdays, every week. Up to 20 people can participate in each hike.

Reflecting strong public interest in walking along the inter-Korean border area, the competition ratio for Goseong’s DMZ Peace Trail has averaged 16 to 1, it noted.

The Goseong trail is run twice a day for six days, except Mondays, every week. Up to 20 people can participate in course A at one time and up to 80 people in course B.