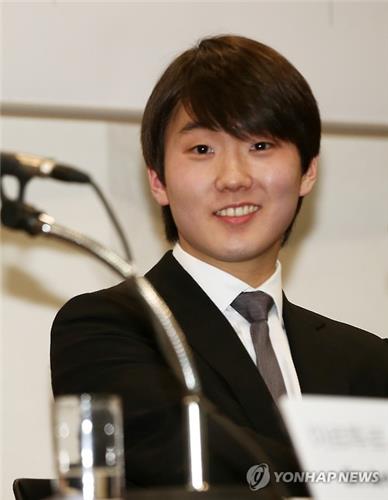 Pianist Cho Seong-jin listens to a question during a news conference in Seoul. (image: Yonhap)

Cho is scheduled to perform at Lotte Concert Hall in Seoul on Jan. 4., and then at Tongyeong Concert Hall in Tongyeong, South Gyeongsang Province, on May 6, according to officials at the two venues.

Only the dates and the venues have been confirmed; Cho’s official homepage doesn’t yet list them on his schedule. The officials said repertoires for the two shows have also not yet been set.

“Even though we haven’t set the time and the repertoire, we’re already getting inquiries about tickets,” an official with Tongyeong Concert Hall said.

Cho, 22, captured the Chopin competition in Poland last October. He held his first concert at home in February this year, and then performed with Seoul Philharmonic Orchestra last Friday at Seoul Arts Center.

Cho is scheduled to release his first album with the prestigious German label, Deutsche Grammophon.

He recorded Chopin’s Piano Concerto No. 1 with the London Symphony Orchestra at Abbey Road Studios in London last month, and will record four more Chopin pieces for his first album.