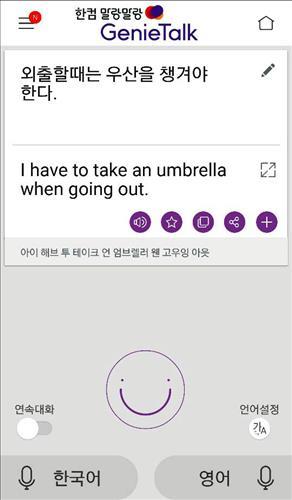 Genie Talk is a translation app that can translate speech and written text, and also has the ability to read and translate text from photos. (image: Yonhap)

SEOUL, Aug. 11 (Korea Bizwire) – Hosting a global sporting event like the Olympics is a lucrative opportunity to attract thousands of overseas tourists, boosting the local economy, and promoting products and culture that might have otherwise been left unnoticed.

However, language barriers can often be frustrating for tourists travelling to a foreign country, which is why Korea will have to overcome communications obstacles if it wants to host a successful PyeongChang Winter Games in 2018 . Yet, with the latest developments in translation and interpretation technology, Korea says “no problem.”

Korean companies have made significant progress with translation technology, so that by 2018, visiting tourists will likely be able to communicate freely with locals using some of the new interpretation offerings.

Hancom Interfree, an affiliate of Korean software pioneer Hancom, launched a new service called Genie Talk in July. Genie Talk is a translation app that can translate speech and written text, and also has the ability to read and translate text from photos. The application supports the six United Nations official languages – Arabic, Chinese, English, French, Russian, and Spanish – in addition to Korean, German, and Japanese.

Although Papago is still in beta testing, and for the Android platform only, Naver plans to continue developing the app to include navigation services, web search functionality, and reservations, hoping to make it a ‘killer app’ for overseas visitors.

Meanwhile, Korean tech behemoth Samsung Electronics also introduced a new translation feature in its newest flagship phablet, the Galaxy Note 7. In a new S-Pen feature, users can simply swipe across a news article, document, or photo to have a selection translated. 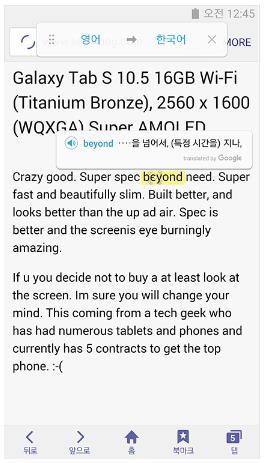 In a new S-Pen feature, users can simply swipe across a news article, document, or photo to have a selection translated. (image: Yonhap)

Such translation technologies have become more commercialized in the first half of 2016 in the Korean market, and industry watchers expect them to make rapid progress in coming years, particularly alongside fast-developing AI tech that is helping to improve the accuracy of translation services.

“Humanity’s language barrier is being torn down with the introduction of various translation apps and devices,” said a tech industry official. “By PyeongChang 2018, Koreans and visiting tourists will be able to communicate much more freely.”