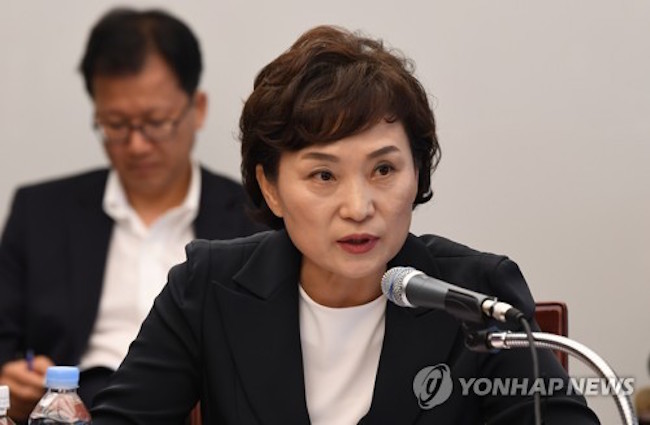 “I will accelerate efforts to lower regulations on smart city technology, self-driving cars and drones to help these next growth drivers.” (Image: Yonhap)

“If the law and system fails to catch up with the speed of technology development, authorities only create regulatory setbacks for technology and industrial innovation,” Kim Hyun-mi, minister of land, infrastructure and transport, said in a meeting with reporters.

“I will accelerate efforts to lower regulations on smart city technology, self-driving cars and drones to help these next growth drivers.”

Local law stipulates that drones are not allowed to fly in most places in the country, especially in the metropolitan area where key government offices are located. Areas around military installations and nuclear power plants are also no-fly zones.

While the South Korean drone market is estimated at around 70 billion won (US$60.9 million), Kim said the government will collaborate with local industries and institutes so it can become a 1.7 trillion won sector by 2023.

The government also plans to open a test bed for autonomous cars linked with a 5G network and provide a three-dimensional map free of charge to help small and medium companies enter the fledgling market. In addition, a public data center will be established by next year to help the commercialization of autonomous vehicles by as early as 2020.

Globally, driverless cars are forecast to hit the road within the next several years and carmakers are jumping to compete in this new market that promises the potential for strong growth going forward.

Also, the government will join forces with the private sector to draw a road map for the smart city project this year, with the goal of exporting a successful model integrating Internet of Things, eco-friendly energy and smart home services, the policymaker said.