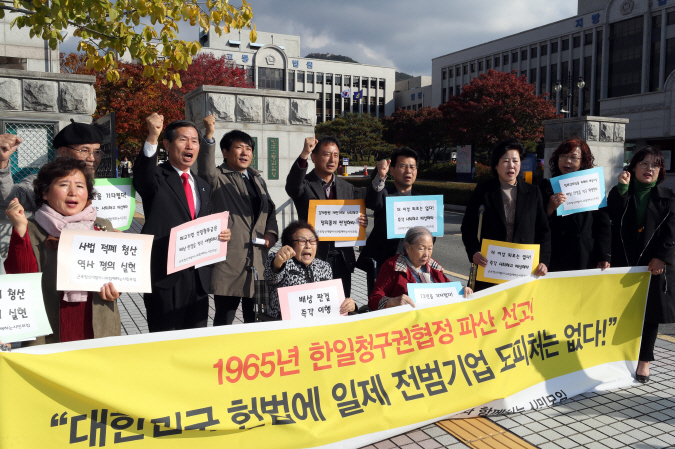 The victims alongside supportive activists held a press conference after the trial, calling for a swift court ruling and pressing Japanese companies to accept the judgment. (image: Yonhap)

GWANGJU, Nov. 1 (Korea Bizwire) — An elderly woman in her 80s strapped in a wheelchair and a grey-haired gentleman sat in the front row of a court room in Gwangju yesterday.

They are victims of forced labor by Mitsubishi Heavy Industries of Japan.

This was the second of three court cases against the Japanese company and marked the first appeal trial of the second court case.

The current appeal trial is being held one year after a ruling in favor of the victims in the previous court trial.

“Four years have passed since the first trial took place and it’s been more than 70 years since the incident happened. We are all nearing 90 years of age,” said the victims, who were calling for an expedited trial.

Kim Jae-rim appealed that at 88 years old, she “no longer had much time to live,” and Oh Cheol-seok, the brother of Oh Gil-ae who died after being forced into labor at the young age of 14 said that he was motivated to be present at the hearing late into the proceedings and “hoped for a swift judgment.”

Victims Yang Yeong-su and Shim Seon-ae were unable to be present due to their physical immobility. Their family members were present on their behalf.

The victims alongside supportive activists held a press conference after the trial, calling for a swift court ruling and pressing Japanese companies to accept the judgment.

Activists said that they welcomed a separate court’s ruling that was announced the day before that ordered Japan’s Nippon Steel & Sumitomo Metal Corp. (NSSM) to pay Koreans for forced labor.

Activists especially found the ruling meaningful because despite the 1965 treaty between Seoul and Tokyo signed to normalize ties between the two countries, the court rejected NSSM’s stance that the compensation issue surrounding forced labor had been cleared by the treaty.

This current trial as well as yesterday’s ruling has created much tension between Korea and Japan.

Experts say that with many similar trials still pending, diplomatic relations between the two countries may be highly affected by future rulings.